West Bengal: Mamata Banerjee Lashes Out at Indian Railways After Knowing 36 Trains Coming from Mumbai, Says 'Railways Planning it on Their Own' 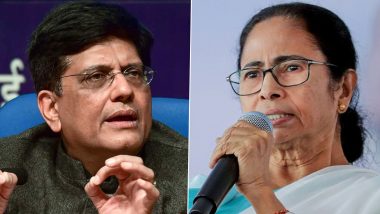 Kolkata, May 27: West Bengal Chief Minister Mamata Banerjee on Wednesday lashed out at Indian Railways after knowing that 36 trains coming from Mumbai to the state without the government's knowledge. She alleged that Indian Railways is planning on it own and not informing the state governments about its actions.

Chairing the meeting with the government officials on the preparedness to tackle COVID-19 and Cyclone Amphan after effects via video conferencing, the CM said, as quoted by news agency ANI, "Without our knowledge, 36 trains are coming from Mumbai. I spoke with Maharashtra, they also got the information late. Railways is planning it on their own." Piyush Goyal Slams Maharashtra Govt for Failing to Provide Details of Passengers, Alleges State 'Not Willing to Tell Which Trains They Want Postponed, Cancelled or Re-scheduled'.

Without our knowledge, 36 trains are coming from Mumbai. I spoke with Maharashtra, they also got the information late. Railways is planning it on their own: West Bengal Chief Minister Mamata Banerjee pic.twitter.com/Sz7yHv7ISm

Earlier on Wednesday, Railways Minister Piyush Goyal accused the Maharashtra government of making false allegations of getting only 30-40 trains to ferry migrants and people of various states. Giving details to the press, Goyal said that out of the 74 trains which were to go until 5 pm from Mumbai, 41 were for West Bengal. While the state government had clearly mentioned that it can welcome only two trains due to cylcone Amphan.

Meanwhile, Indian Railways has stated that it had operated 3,274 Shramik Special Trains and have ferried 44 lakh passengers to their home states so far. It said that 3,274 Shramik trains have been run since the last 25 days from May 1 to May 25. On May 25, 223 Shramik specials ferried 2.8 lakh passengers to different states amid the COVID-19 lockdown.

(The above story first appeared on LatestLY on May 27, 2020 04:45 PM IST. For more news and updates on politics, world, sports, entertainment and lifestyle, log on to our website latestly.com).