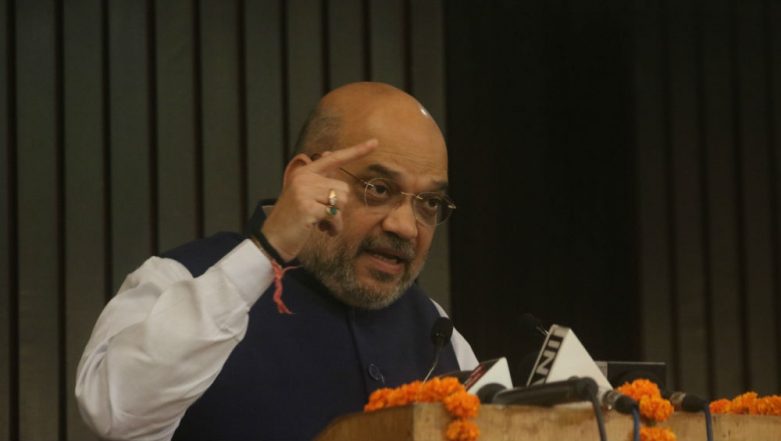 Raipur, Sep 21: BJP president Amit Shah on Friday asked Congress chief Rahul Gandhi if he supported "urban Naxals" plotting to assassinate the prime minister and demanded he clarifies his stand on the issue to people in poll-bound Rajasthan, Madhya Pradesh and Chhattisgarh. Shah's comments come in the wake of the Maharashtra police arresting five human rights activists late last month for their alleged links with Maoists. "The BJP government in Maharashtra recently arrested urban Maoists. Questions were raised about their arrest as they have the right to speak. Shouldn't those possessing mortar (guns) and plotting to assassinate the prime minister be arrested?" Shah asked. He asked Congress president Rahul Gandhi if he supported those who "wanted to break the country". "The Congress president should make clear his party's stand on the Maoist issue in the poll-bound Madhya Pradesh, Chhattisgarh and Rajasthan," Shah, addressing a gathering of party workers, said. He alleged that Gandhi and the UPA have no concern for national security. "Our party's stand is clear right from the time of foundation of the Jan Sangh (the BJP's predecessor) that we have zero tolerance for anti-national forces," he added. Amit Shah Kicks Off BJP’s Election Campaign in Telangana, Says 'Will Make It a State Where Neither Dalits nor the Tribals Will Be Oppressed'.

The BJP chief also lauded the efforts of chief minister Raman Singh's government for eliminating the menace of Naxalism from Chhattisgarh.

Speaking about the publication of National Register of Citizens (NRC) in Assam, Shah said the BJP will ensure that no illegal infiltrator stays in the country.

"The National Register of Citizens was implemented and prima facie as many as 40 lakh people were identified as illegal immigrants in Assam," he said.

"Rahul Gandhi, do whatever you want to do, but in 2019, the BJP will not allow any infiltrator to stay in the country after it again storms to power...It is our resolution," the BJP chief said. "When the Jan Sangh was formed, it had only 10 members but now it (the BJP) has around 15 crore active members and the flag of the BJP is now flying over around 70 per cent of the country," he said.

He asked party workers to work hard so that the BJP has a strong presence from panchayat to Parliament for the next fifty years. Congress, BJP Does a Rare Alliance in Mizoram to Run Chakma Tribal Council.

Shah also mocked Gandhi, calling him "Rahul baba" and saying he is "day-dreaming" about the Congress' victory in Rajasthan, Madhya Pradesh and Chhattisgarh, BJP-ruled states where elections are due by year-end.

"There is no ban on dreaming, but who dreams in broad daylight with eyes open?" Shah asked.

The Congress president should see the poll results since 2014 and then he will realise what is going to happen in these three poll-bound states, he said. Expressing confidence of a fourth consecutive victory for the BJP in Chhattisgarh, Shah asked the party workers to resolve to win at least 65 out of 90 seats. Singh and other party leaders were present on the occasion.