The Election Commission on Saturday announced the dates for Assembly Elections 2018 in Rajasthan, Madhya Pradesh, Chhattisgarh, Mizoram and Telangana. 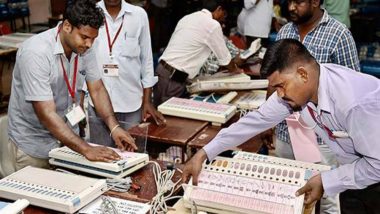 The full-schedule of the five-state polls - Rajasthan, Telangana, Madhya Pradesh, Chhattisgarh and Mizoram - has been released by the Election Commission. The polls, commencing from November 12, will conclude on December 7. The results will be declared on December 11.

The model code of conduct has been put in place in the four states from today. CEC OP Rawat said that the theme for these polls is 'accessible elections'. There will be at least one polling station in every constituency which will be an all-women polling station. All machines being used are M-III. VVPATs will also be used along with Electronic Voting Machines. The CEC also announced that the candidate expenditure limit is Rs 28 lakh except in Mizoram.

The tenure of the 200-seat Rajasthan Assembly will end on January 20, 2019. The Congress has been firing attacks on Chief Minister Vasundhara Raje over farmer issues, crimes against women among other crisis in the state. An ABP-CVoter opinion poll had earlier this year predicted that the Congress is likely to win 130 seats in Rajasthan while the BJP would be down to 57. Rajasthan Assembly Elections 2018 Full Schedule And Dates: Single-Phase Voting on December 7, Results on December 11.

The term of the 230-seat Madhya Pradesh Assembly will end on January 7, 2019. It is a battle between the Congress and the ruling BJP. While Chief Minister Shivraj Singh Chouhan is looking at a fourth term in the state, it remains to be seen who emerges as the CM candidate for the Congress - Kamal Nath or Jyotiraditya Scindia. However, the BSP and AAP have also decided to contest all 230 seats in the state. Madhya Pradesh Assembly Elections 2018 full Schedule And Dates: Polling for All 230 Seats on 28 November.

The tenure of the 90-seat Chhattisgarh Assembly will end on January 5, 2019. In Chhattisgarh, it is a fierce three-way fight with BSP chief Mayawati announcing an alliance with Janata Congress and announcing Ajit Jogi as the CM candidate. The Congress and BJP are fighting it out among themselves. Opinion polls have predicted a mixed bag in the state. Chhattisgarh Assembly Elections 2018 Full Schedule And Dates: Polling in 2 Phases, November 12 & 20.

The term of the Mizoram Assembly will end on December 15, 2018. The BJP has decided to go alone in the state currently ruled by the Congress. While opinion polls have indicated a contest between the Congress and the Mizo National Front, they have said that the BJP is likely to make a dent in the Congress vote share in the northeastern state. Mizoram Assembly Elections 2018 Full Schedule And Details: Voting to be Held on November 28, Results on December 11.

While Telangana Elections were due next year, Chief Minister K Chandrasekhar Rao dissolved the Assembly and called for early elections in the state. Telangana Assembly Elections 2018 Full Schedule And Dates: Voting on December 7, Results on December 11.

These elections are crucial for both the national parties - Congress and the BJP - as they will be the last before the 2019 Lok Sabha elections.

(The above story first appeared on LatestLY on Oct 31, 2018 09:40 PM IST. For more news and updates on politics, world, sports, entertainment and lifestyle, log on to our website latestly.com).