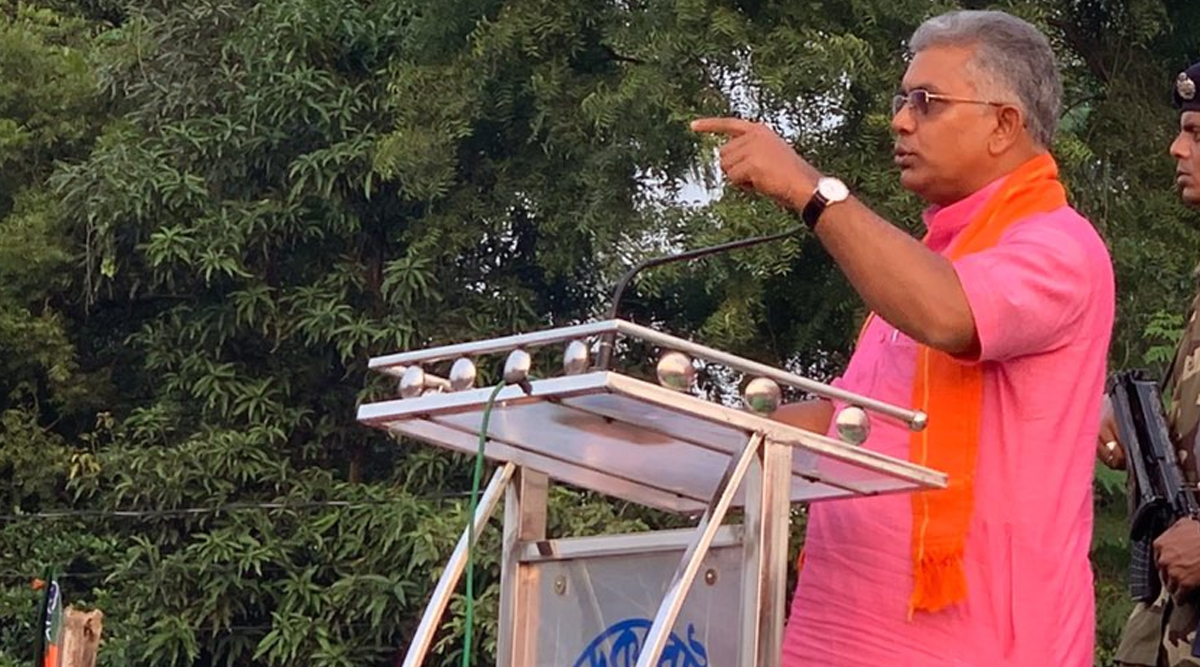 Kolkata, January 19: Bharatiya Janata Party’s (BJP’s) West Bengal Chief Dilip Ghosh on Sunday stoked another controversy. During a rally in North 24 Parganas, Ghosh said that when the BJP comes to power, people damaging public property would be identified and shot at. Taking a dig at Mamata Banerjee, Ghosh said, “Under Mamata Banerjee's government, even if one damages public property worth Rs 500 crores, that person escapes it. When we come to power then every such person will be identified and shot at. Nobody will be spared. Dilip Ghosh Re-Elected As West Bengal BJP Chief, Gets Second Term.

Adding further, he said that 50 lakh Muslim infiltrators would be be identified, if needed they would be chased out of the country. He stated, “Firstly their names will be removed from voters' list then Didi (CM Mamata Banerjee) can't appease anyone.” Ghosh said that removing illegal voters from the list would reduce Banerjee’s vote-bank. He claimed that, in the upcoming elections, the BJP would win 200 seats, while, the Trinamool Congress would fail to get 50 seats.

#WATCH West Bengal BJP Chief Dilip Ghosh in North 24 Parganas: Under Mamata Banerjee's government, even if one damages public property worth Rs 500 crores, that person escapes it. When we come to power then every such person will be identified and shot at. Nobody will be spared. pic.twitter.com/ihU9LqtQcZ

Ghosh added, “Those who are opposing the CAA are either anti-India or anti-Bengali. They are against the idea of India, that is why they are opposing Hindu refugees getting citizenship. The BJP chief also alleged that illegal Bangladeshi Muslims are involved in arsons across the state. TMC Files Two FIRs Against BJP West Bengal Chief Dilip Ghosh Over ‘Our Govt Shot Vandals Like Dogs’ Remark.

Dilip Ghosh, West Bengal BJP Chief: Once this is done Didi's (CM Mamata Banerjee) votes will be reduced and in the coming elections, we will get 200 seats, she will not even get 50 seats. https://t.co/2ZCH4zp5Mn

Earlier this month, Ghosh also stirred controversy after he said that BJP government's in Uttar Pradesh, Assam and Karnataka shot ant-CAA protesters like "dog".  He made this remark while addressing a pro-CAA rally in Ranaghat of Nadia district. Two police complaints were registered against the BJP West Bengal  chief for his remark. Chief Minister Mamata Banerjee had also condemned the remarks of Ghosh, asking the BJP central leadership to take action against him for the provocative remarks.