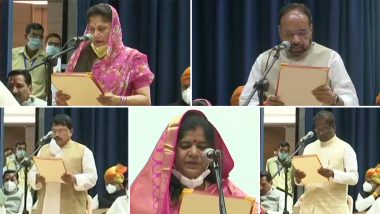 More than three months had passed since the Bharatiya Janata Party (BJP) government was formed in the state. Cabinet expansion has been under discussion for a long time. Only five ministers were sworn in after Chouhan returned as Chief Minister. They were BJP leaders Narottam Mishra, Kamal Patel and Meena Singh while two ministers, Govind Singh Rajput and Tulsi Silawat, have been inducted from the ranks of ex-Congress MLAs, who had switched over to the BJP in mid-March.

Chouhan took oath as chief minister for a record fourth term on March 23 this year, after Kamal Nath resigned from the post following a rebellion by 22 MLAs of the Congress. Asked about the discontent brewing in the state BJP and the ongoing churning in the party over the cabinet expansion, Chouhan had on Wednesday said that the "churning produces nectar but Lord Shiva drinks the poison."

(The above story first appeared on LatestLY on Jul 02, 2020 11:30 AM IST. For more news and updates on politics, world, sports, entertainment and lifestyle, log on to our website latestly.com).