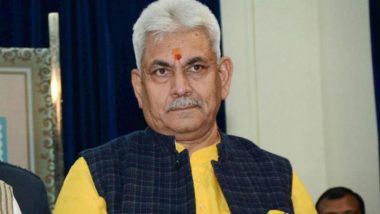 Jammu & Kashmir, August 6: Manoj Sinha will be the new Lieutenant Governor of Jammu and Kashmir as President Kovind accepted the resignation of Girish Chandra Murmu. On the first anniversary of J&K reorganisation, GC Murmu tendered his resignation. The senior IAS officer was subsequently announced as the next Comptroller Auditor General (CAG).

Murmu, a 1985-batch Gujarat cadre officer, worked with Prime Minister Narendra Modi when he was the Gujarat Chief Minister. After Modi became the Prime Minister, the officer joined the Union Finance Ministry. He became part of the expenditure department as a joint-secretary. GC Murmu Resigns as Jammu & Kashmir Lieutenant Governor, Appointed as Next CAG.

Manoj Sinha to be the New Lieutenant Governor of J&K:

Manoj Sinha to be the new Lieutenant Governor of Jammu and Kashmir as President Kovind accepts the resignation of Girish Chandra Murmu. pic.twitter.com/QPS5D1jO8h

Murmu, last month, had drawn flak from the Election Commission after he claimed that the polling process would be initiated in the UT in the near future. The EC had, in a statement, claimed that the conduct of polls falls under the jurisdiction of the Commission and should be considered as the key authority in announcing the updates related to upcoming elections.

Sinha was BHU student union president leader and has won Lok Sabha elections twice from Ghazipur in eastern UP. He, however, lost the 2019 polls.

(The above story first appeared on LatestLY on Aug 06, 2020 07:35 AM IST. For more news and updates on politics, world, sports, entertainment and lifestyle, log on to our website latestly.com).