Capt Amarinder Singh said people of Punjab had understood the importance of a "double-engine" government in Punjab which will watch and safeguard the national interest and help in reviving Punjab's economy. "Promising days are ahead for Punjab", he had remarked. 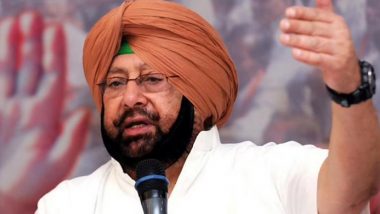 Chandigarh, March 10: In a major embarrassment for two-time Punjab Chief Minister and Congress rebel Capt Amarinder Singh in a fag-end of his political career, he faced a humiliating defeat from AAP's greenhorn Ajit Pal Kohli with over 13,000 votes on Thursday from his stronghold Patiala (Urban), the seat that he has won for four consecutive terms since 2002 when he first contested.

He is seen as a nationalist, and widely respected leader of the BJP-led alliance. The former's fledgling Punjab Lok Congress (PLC) was contesting the polls in alliance with the BJP and SAD (Sanyukt), an Akali Dal rebel.

In the Congress-ruled state, Arvind Kejriwal's AAP is heading for a landslide win, with the Congress, the Shiromani Akali Dal (SAD) and the BJP far behind. Capt Amarinder Singh left the Congress just ahead of the polls after the Congress unceremoniously removed him from the helm and he floated his own party. Punjab Assembly Election Results 2022: Captain Amarinder Singh Loses To AAP's Ajit Pal Kohli.

A day ahead of the counting of votes, Capt Amarinder Singh exuded full confidence, saying he expected positive verdict by the people of Punjab in favour of his party Punjab Lok Congress and the alliance partners, including the Bharatiya Janata Party and the Shiromani Akali Dal-Samyukt.

In his statement, Capt Amarinder Singh had said, "the counting of votes marks the conclusion of the electoral festival of democracy and we are confident of outstanding results".

Capt Amarinder Singh said people of Punjab had understood the importance of a "double-engine" government in Punjab which will watch and safeguard the national interest and help in reviving Punjab's economy. "Promising days are ahead for Punjab", he had remarked.

In the 2019 parliamentary polls, Capt Amarinder Singh steered his former party -- the Congress to a victory in his ruling Punjab in eight out of 13 Lok Sabha seats despite Prime Minister Narendra Modi's wave across the country.

At a public meeting ahead of the polls, Union Home Minister Amit Shah had a special praise for Capt Amarinder Singh that he always rose above partisan considerations when it came to the issues concerning national security. Punjab Election Results 2022: The Rise of Aam Aadmi Party in Punjab.

He said when he became the Home Minister in 2019, he felt quite concerned about the security along the Punjab border. "But once I spoke to Capt Amarinder, I felt relaxed," he had recalled at his rally in Patiala town.

(The above story first appeared on LatestLY on Mar 10, 2022 01:38 PM IST. For more news and updates on politics, world, sports, entertainment and lifestyle, log on to our website latestly.com).