Noting that his government had already implemented most of the promises made to the people in the 2017 party election manifesto, the Chief Minister told the party's state leadership that the other pending issues were also being resolved. 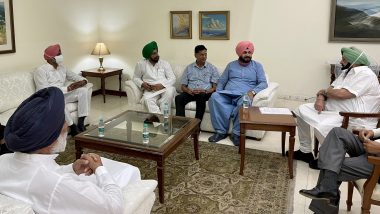 Chandigarh, July 27: Punjab Chief Minister Amarinder Singh on Tuesday told the newly-constituted state Congress team that all key issues of concern raised by them were already in advanced stages of resolution by his government, which had been working on them in close coordination with the party.

The new leadership team, led by state chief Navjot Singh Sidhu, had called on the Chief Minister and submitted a letter listing out some issues as needing urgent settlement. Working Presidents Kuljit Singh Nagra, Sangat Singh Gilzian, Sukhwinder Singh Danny, and Pawan Goel had accompanied Sidhu to their first meeting with the Chief Minister since taking over the state Congress reins.

Noting that his government had already implemented most of the promises made to the people in the 2017 party election manifesto, the Chief Minister told the party's state leadership that the other pending issues were also being resolved. Navjot Singh Sidhu, Newly-Appointed Punjab Congress Chief, to Take Charge on July 23: Sources.

His government was committed to the implementation of all the poll promises, Amarinder Singh later said, describing the meeting as cordial. Stressing the need to work closely together in the interest of the party, the Chief Minister told Sidhu and the Working Presidents that "your win is my win and our win is the party's win, and we need to work together in the interest of the state and its people".

Amarinder Singh said the party leaders and workers need to take the pro-people decisions and actions of the government to the ground, so that the people of Punjab could be made aware of all the excellent work done in the past four plus years of the Congress government in the state. The Chief Minister offered to meet the party leaders on regular basis to ensure better coordination between the government and the party.

(The above story first appeared on LatestLY on Jul 27, 2021 06:55 PM IST. For more news and updates on politics, world, sports, entertainment and lifestyle, log on to our website latestly.com).