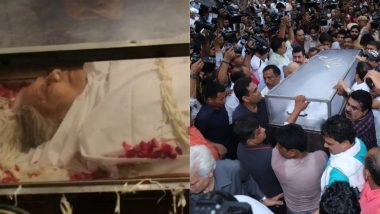 Dikshit served as the chief minister of Delhi for three terms. She held the post for 15 years, becoming the first chief minister to do so. Dikshit is often credited for changing the face of Delhi and introducing several landmark infrastructure projects such as Delhi metros.

Prime Minister Narendra Modi had also tweeted on the demise of the former Delhi chief minister. "Deeply saddened by the demise of Sheila Dikshit Ji. Blessed with a warm and affable personality, she made a noteworthy contribution to Delhi’s development. Condolences to her family and supporters. Om Shanti," PM Modi tweeted.

(The above story first appeared on LatestLY on Jul 21, 2019 03:52 PM IST. For more news and updates on politics, world, sports, entertainment and lifestyle, log on to our website latestly.com).