While the panchayat elections in the state are not contested on party symbols, this time both the BJP and SP had officially declared the names of the candidates backed by them. 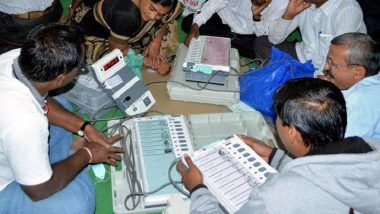 Lucknow, May 4: With the counting for the three-tier panchayat elections in Uttar Pradesh still on, the ruling BJP and the opposition Samajwadi Party (SP) have claimed that their candidates have won over half of the zila panchayat seats. While the panchayat elections in the state are not contested on party symbols, this time both the BJP and SP had officially declared the names of the candidates backed by them.

The Congress, too, had named its candidates on selected seats. The BJP claimed that that out of the 3,051 members for the zila panchayat, 918 of their candidates had won and another 456 were leading. BJP spokesman Harish Chandra Srivastava said that his party was winning majority of the seats in the panchayat elections which was a result of the welfare policies of the Centre and state governments. UP Gram Panchayat Elections Results 2021 Winner List: Here's How to Check The Complete List of Winners of Panchayat Polls Online at sec.up.nic.in.

The SP also claimed that more than 50 percent of victorious candidates were backed by them. SP spokesperson Rajendra Chaudhary said: "More than 50 percent seats declared so far have been won by SP supported candidates. The BJP has lost its ground not just in urban areas but also in villages for their failure to provide governance, especially during the pandemic, and have been exposed."

The Congress, on the other hand, avoided commenting and maintained that they would share the list of their winning candidates on Tuesday. A Congress spokesman however said: "The claims of SP and BJP are false. While the BJP had declared its candidates, the SP had not even properly named its candidates. Both are claiming the victory of independent candidates as their own."

(The above story first appeared on LatestLY on May 04, 2021 10:29 AM IST. For more news and updates on politics, world, sports, entertainment and lifestyle, log on to our website latestly.com).