Samajwadi Party President Akhilesh Yadav on Saturday said that his party would win 351 seats in the assembly elections in Uttar Pradesh, which is scheduled to be held in 2022. 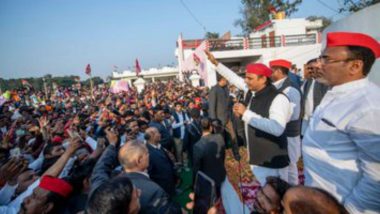 Lucknow, February 22: Samajwadi Party President Akhilesh Yadav on Saturday said that his party would win 351 seats in the assembly elections in Uttar Pradesh, which is scheduled to be held in 2022. "Soon the Samajwadi Party’s cycle will speed up. We will win 351 seats and form the government with the cycle, adjustment and connecting with all sections of people," Akhilesh Yadav said at the Hindustan Shikhar Samagam, a conclave of Hindi daily Hindustan. Akhilesh Yadav Claims Receiving Threat Call and Message from BJP Leader After Man Shouts 'Jai Shri Ram' Slogans at an Event.

Akhilesh Yadav also ruled any pre-poll alliance with any party. "This time, the Samajwadi Party will contest alone. If we have to make any adjustment, we will do it. But there will be no alliance," the former Chief Minister said. In the 2017 assembly election, the SP had tied up with the Congress but failed to retain power. The SP also formed an alliance with Mayawati's Bahujan Samaj Party (BJP) for the 2019 Lok Sabha elections, but the coalition failed to stop Narendra Modi from coming to power. Uttar Pradesh Assembly Elections 2022: Shivpal Yadav Endorses Akhilesh Yadav as CM Candidate.

However, in by-elections held in October last year, the Akhilesh Yadav led-Samajwadi Party contested on its own and won three of the 11 assembly seats, wresting Zaidpur from the Bharatiya Janata Party (BJP) and Jalalpur from the BSP. It was the first time the SP contested any election on its own ever since Akhilesh became the party chief in January 2017.

Speaking at the event, Akhilesh also congratulated the people of Delhi for not voting for "hate, poison, divisiveness" -  an apparent dig at the BJP. "I always said kaam bolta hai (work speaks for itself). In Delhi, work spoke for itself and in 2022 it will speak in UP,” he said. "I don’t need to catch hold of Ram or Hanuman. I will choose kaam (work)," he added.

Akhilesh Yadav also reiterated his party’s position and said that they are against the "divisive" Citizenship Amendment Act, National Population Register (NPR) and National Register of Citizens (NRC). "The members of the Samajwadi Party will not fill NPR forms. We want to talk about work only," the SP chief said.

(The above story first appeared on LatestLY on Feb 22, 2020 04:47 PM IST. For more news and updates on politics, world, sports, entertainment and lifestyle, log on to our website latestly.com).