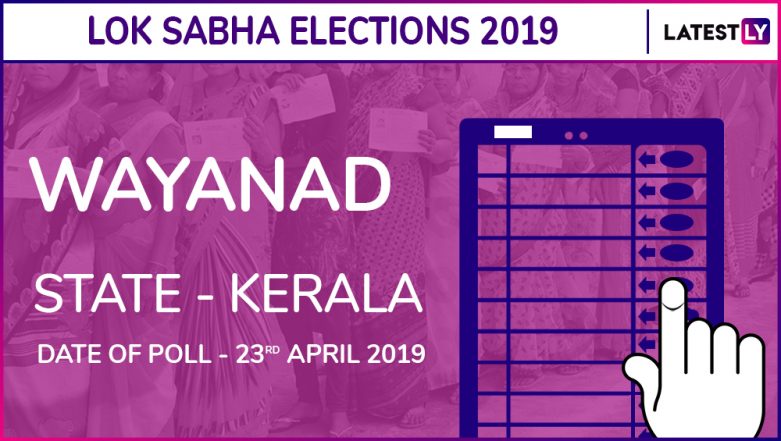 The results of the Wayanad Lok Sabha Constituency has been declared. Congress President Rahul Gandhi won the constituency with 7,06,367 votes. He had contested from Kerala for the first time along with his traditional seat of Amethi in Uttar Pradesh. Gandhi won from the constituency by a margin of 4,31,770 votes. Other candidates in the fray in Wayanad included Communist Party Of India (CPI) candidate PP Suneer, Bharath Dharma Jana Sena's (BDJS) Thushar Vellapally and Bahujan Samaj Party (BSP) candidate Mohamed P K. Voting took place for the Wayanad Constituency on April 23. According to the Election Commission, a total voter turnout of 80.28 per cent was recorded in the constituency.

Wayanad, a rural district in Kerala is one among the 20 Lok Sabha constituencies in the state. The region which shares borders with Karnataka and Tamil Nadu has been a Congress stronghold. It is famous for its lush green cover, wildlife and is a major tourist spot in the state. Wayanad constituency was formed in 2008 following fresh delimitation of seats. MI Shanavas from the Congress party won the 2009 elections and 2014 Lok Sabha elections. Shanavas died in 2018 and the seat has been lying vacant since then.

Wayanad had grabbed national attention after Congress nominated its national president Rahul Gandhi from the district. CPI's P P Suneer, who was the former district secretary of the party in Malappuram was Left's candidate in Wayanad. The BJP had extended support to Thushar Vellappally of BDJS. Check Full Schedule of Lok Sabha Elections 2019.

The Lok Sabha elections 2019 was held between April 11 and May 19 in seven phases. In Kerala, voting was held in a single phase. During the third phase, the polling was held in 115 Lok Sabha constituencies of 14 states. The counting of votes was held on May 23 and thereafter the results were declared.