From Falguni & Shane Peacock to Manish Malhotra, Kriti has nailed so many sarees by various designers that it's hard for us to keep a tab on. 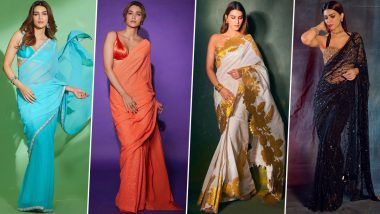 Kriti Sanon is certainly making headlines for all the right reasons. With no links to Bollywood whatsoever, Kriti is a classic example of how Bollywood belongs to outsiders as well. While she marked her debut in 2014, she's finally getting the kind of roles made for her calibre. With some interesting projects already in her kitty, Sanon is on the right track to becoming the new 'IT' girl of B-town. Currently, the pretty lady is busy promoting her next release, Bhediya. And seeing her sartorial avatars for its promotions reminded us of her previous attempts. Fashion Faceoff: Kriti Sanon or Malaika Arora, Who Nailed This Safiyaa Outfit Better?

Kriti has been often criticised for her fashion attempts but we are glad for she's finally getting it right. With the help of her stylist, Sukriti Grover, Sanon is able to put together different looks - some worked while others didn't. However, if there's any one department that she has continued to excel in, it's her impeccable saree wardrobe. With her tall and lean frame, the Heropanti actress manages to shine bright in her traditional six yards. From Falguni & Shane Peacock to Manish Malhotra, Kriti has nailed so many sarees by various designers that it's hard for us to keep a tab on. Kiara Advani, Kriti Sanon and Manushi Chhillar Are Obsessing Over this Ritika Mirchandani Design! (View Pics).

However, since we are discussing her best attempts already, we can always mention some of our favourite looks by her, right? So here you go. Below is a compilation of some of her best saree looks that you can ogle at. Have a look and thank us later.

So, which of Kriti Sanon's looks did you like the most? Drop your views on Twitter @latestlt.

(The above story first appeared on LatestLY on Nov 25, 2022 11:00 AM IST. For more news and updates on politics, world, sports, entertainment and lifestyle, log on to our website latestly.com).