Deepika Padukone Looks Appealing in a Blue Blazer on the Latest Femina Cover, Actress Says ‘This Is the Only Magazine I Saw My Mother Read’

On the work front, Deepika has as many as six films in her kitty. Deepika will be seen in Fighter alongside Hrithik Roshan. She has Shakun Batra's untitled project with Siddhant Chaturvedi and Ananya Panday. 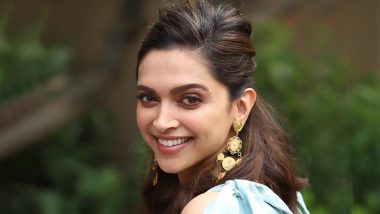 Deepika Padukone will be having a busy time ahead with all the projects she has in her kitty. She kicked started the new year by spending some quality time with her hubby Ranveer Singh and family in Ranthambore and soon returned back to Mumbai for work. She also deleted her photos and videos on Instagram before she entered the new year and is now treating her fans with some fresh and new content on her social media handle. Today, she posted a stunning picture of a magazine cover page which featured her in a gorgeous avatar. Deepika Padukone to Play Wonder Woman Inspired Superhero in Her Next Movie?

We can see a close-up shot of Deepika dressed in a blue blazer in the picture that she shared. The cover also mentioned what Deepika has talked about in this edition of Femina. She looks her appealing self on the cover, giving her classic gaze as her hair falls on her beautiful face. Her caption was even more amusing as she shared that this was the very magazine that her mother used to read when she was young. "Timeless & Iconic! Thank You for the feature,” read her caption further.

Opening up about Deepika's busy schedule, a source close to the actress revealed, "Even though all of the films will not be shot this year, but at all times, Deepika will be shooting for a minimum of 2 projects all through the year plus pre-planning for the later film shoots. This is something she had not done in a while now. Deepika understands how busy this year is going to be for her with multiple films and brand endorsements, so she took a couple of days off at the beginning of the year itself to spend time with her parents and sister, who live away in Bangalore.” Deepika Padukone Blatantly Copies Irina Shayk! Indian Actress’ New Ad Is a Complete Rip-Off of Hot Russian Model’s 2013 Photo Shoot.

On the work front, Deepika has as many as six films in her kitty. Deepika will be seen in Fighter alongside Hrithik Roshan. She has Shakun Batra's untitled project with Siddhant Chaturvedi and Ananya Panday. She will be also be reuniting with Shah Rukh Khan in Pathan. She has a Nag Ashwin’s pan India multilingual film with Prabhas and also the Hindi remake of The Intern. She is also a part of Mahabharata.

(The above story first appeared on LatestLY on Jan 18, 2021 06:58 PM IST. For more news and updates on politics, world, sports, entertainment and lifestyle, log on to our website latestly.com).