Kareena Kapoor Khan Borrows Shahid Kapoor’s Wife, Mira Rajput’s This Style but We Want You to Decide Who Nailed It Better

Vote for your favourite lady now. 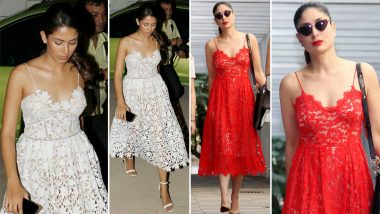 Kareena Kapoor Khan's versatile wardrobe is a major reason why her style file gets a thumbs up on most of the occasions. From opting for a casual t-shirt with jeans to making some stunning appearances on the red carpet, she's always ready to strike a chord with her admirers. Her impeccable styling often makes us root for her and there's never an occasion when she fails to stun us with her oh-so-wow choices. We are totally digging her recent red-hot look by Self Portrait. Bebo looked ravishing in her red "Azalea" dress and hats off to her for nailing it better than other Hollywood celebrities including Masie Williams, Miranda Kerr and Abigail Spencer. But hey, that's the same outfit that Shahid Kapoor's wife, Mira Rajput wore for a casual outing, right? Kareena Kapoor Khan To Be Back With Her Sassiest Character Poo From K3G? (Read Deets).

Mira and Kareena's fashion choices are usually so distinctly different but they finally have something in common. The year was 2015 when the star wife was one of the best-dressed celebs at designer Masaba Gupta's bridal shower party. Yea, Mira was able to justify the creation three years before than Bebo and we wonder why it took so long for her to present her own version. Though the colour palettes are strikingly different, we are eager to know who nailed it better. Both the lovely ladies paired her outfits with no major jewellery and a chic ponytail instead. While the Udta Punjab actress looked more radiant, Mira's look was very subtle. Shahid Kapoor and Mira Rajput Share a Passionate Kiss as They Celebrate Love This Diwali (View Pics).

Do you think Mira Rajput sizzled in her white lace outfit or was it Kareena that nailed the same outfit better than her? Let us know your answers in the voting section below.

(The above story first appeared on LatestLY on Nov 13, 2018 11:37 AM IST. For more news and updates on politics, world, sports, entertainment and lifestyle, log on to our website latestly.com).