February 2019 Festivals, Events and Holiday Calendar: Valentine’s Day to Vasant Panchami, Know All Important Dates and List of Hindu Fasts for the Month

The eight-day Valentine Week (Rose Day, Chocolate Day, Kiss Day, and so on) is celebrated with much joy and enthusiasm by the young lovers. But February is not only about Valentine’s Day. 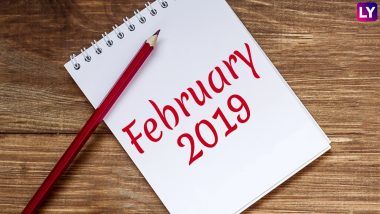 After enjoying a number of harvest festivals and celebrating the 70th Republic Day in January 2019, we now look forward to celebrations in the second month of the year – February. When speaking of special days in February, the first festivity that pops in our mind is Valentine’s Day. Despite being a Western celebration, the ‘Festival of Love’ has become immensely popular in India. The eight-day Valentine Week (Rose Day, Chocolate Day, Kiss Day, and so on) is celebrated with much joy and enthusiasm by the young lovers. But February is not only about Valentine’s Day. It has several other important festivals and memorable days such as Vasant Panchami or Saraswati Puja, Chhatrapati Shivaji Maharaj Jayanti, Guru Ravidas Jayanti and more. One of the four Navratri, Gupt Navratri in Magha will also be commemorated this month. Let us look at the February 2019 calendar in detail, the important days and events to commemorate, along with religious festivals, birth and death anniversaries. Valentine Week 2019 Calendar PDF Download Online: List With Dates of Valentine’s Day, Rose Day, Chocolate Day, Hug Day, Kiss Day to Celebrate the Festival of Love!

February 2019 calendar will witness a good mix of Hindu vrat (fasts), festivals as well as significant international days. In the first week, devotees will observe fasts on Til Dwadashi, Shani Pradosh Vrat, Masik Shivaratri and Mauni Amavasya. In Til Dwadashi, which falls on the 1st of February, people worship Lord Vishnu with sesame seeds. On 2nd February, Shani Pradosh Vrat in honour of Lord Shiva and Devi Parvati will be observed. Masik Shivaratri will also take place on the same day. Mauni Amavasya is falling on February 4, which is on Monday and considered very auspicious. The second Shahi Snan in the ongoing Kumbh Mela 2019 will be taking place on Mauni Amavasya. Year’s first Navratri, Gupt Navratri 2019 will begin from February 5, Tuesday onwards. Speaking of international events and days in the first week, World Cancer Day, a day dedicated to raise awareness of cancer and to encourage its prevention, detection, and treatment will take place on February 4. Calendar 2019 For Free Download in PDF: Know List of Hindu Festivals, Holidays, Fasts According to Drik Panchang, Kalnirnay, Lala Ramswaroop Calendars Online.

List of International Days and Bank Holidays in February 2019

(The above story first appeared on LatestLY on Feb 03, 2019 12:02 PM IST. For more news and updates on politics, world, sports, entertainment and lifestyle, log on to our website latestly.com).