Guinea Pig Appreciation Day 2020: Interesting Facts About This Pocket Pet You Probably May Not Have Known! 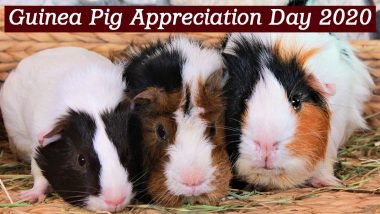 Not all guinea pigs are the same, some have lush coats while others have nothing at all. They love veggies and always munch on leaves and fruits. If you have Guinea Pigs at home, you can make them feel special on this day by getting them treats like some fresh green vegetables. Also, you can also buy them a cage where they like to laze around.

People celebrate the day by posting pictures with these little pets on social media using the hashtags #GuineaPigAppreciationDay. You can also let people know about the day and celebrate it by sending these facts. Happy Guinea Pig Appreciation Day to everyone who has one at home!

(The above story first appeared on LatestLY on Jul 16, 2020 07:36 AM IST. For more news and updates on politics, world, sports, entertainment and lifestyle, log on to our website latestly.com).