International Day Commemorating the Victims of Acts of Violence 2019: Date, History and Significance of the Day

The United Nations (UN), in its 73rd General Assembly session on May 22, 2019, adopted a resolution to observe August 22 as International Day Commemorating the Victims of Acts of Violence Based on Religion or Belief. The resolution was proposed by Poland. 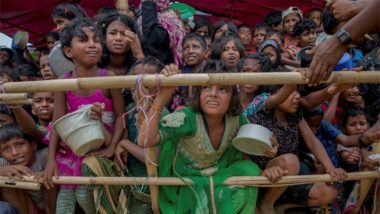 The United Nations (UN), in 73rd session of the General Assembly on May 22, 2019, adopted a resolution to observe August 22 as International Day Commemorating the Victims of Acts of Violence Based on Religion or Belief. The resolution was proposed by Poland and supported by countries including the United States, Canada, Egypt and Brazil. This year, for the first time, the day will be observed to create awareness against the act of violence. Rohingya Crisis: We Have Successfully Contained Influx Of Rohingyas Into India, Says DG BSF KK Sharma.

Freedom of religion or belief, freedom of opinion and expression, the right to peaceful assembly and the right to freedom of association are interdependent, interrelated and mutually reinforcing. They are enshrined in articles 18, 19 and 20 of the Universal Declaration of Human Rights. Upholding these rights plays an important role in the fight against all forms of intolerance and of discrimination based on religion or belief. India Provides 'unprecedented' Accommodation to Its Religious Minority Population: Report.

According to the UN, There are continuing acts of intolerance and violence based on religion or belief against individuals, including against persons belonging to religious communities and religious minorities around the world and these case are increasing. UN Secretary-General Antonio Guterres speaking about the resolution said, “It is also an opportunity for all of us to demand an end to such violence with societies based on peace through dignity and mutual respect.” He further added that no-one should ever suffer violence due of their faith or beliefs.

The UN also urged member states to step up efforts against such crimes. The day will provide an opportunity for the international community to express solidarity with the victims and survivors of religious persecutions. The International Day to Commemorating the Victims of Acts of Violence will also be observed to address the underlying issues of religious intolerance and discrimination. Meanwhile, on August 21, the International Day of Remembrance and Tribute to the Victims of Terrorism, was observed.

(The above story first appeared on LatestLY on Aug 22, 2019 08:15 AM IST. For more news and updates on politics, world, sports, entertainment and lifestyle, log on to our website latestly.com).