International Day for the Abolition of Slavery 2021: Know Date, History, Significance, Theme and Facts About This Important Yearly Event

International Day For Abolition Of Slavery 2021 Date is 2nd December and it has been celebrated since 1986 as announced by the United Nations General Assembly. Here are some important specifications you need to know about International Day for the abolition of slavery 2021-date, its history, theme, facts, and the significance of the day. 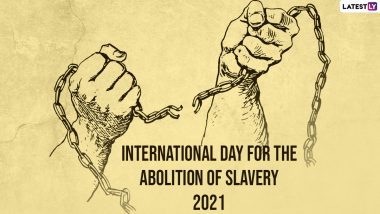 International Day for the Abolition of Slavery 2021(File Image)

International Day For The Abolition Of Slavery History

International Day For The Abolition Of Slavery Significance

More than 40 million people worldwide are now a victim of modern slavery. Modern slavery is a term that is defined as an umbrella covering force labour, debt bondage, forced marriage, and human trafficking-related issues. The UN will be creating a campaign that will help people by restoring their hope and freedom. The United Nations (UN) is dedicated to fighting against slavery and sees bonded labour, forced labour, child labour, and trafficking people as modern types of slavery.

International Day For Abolition of Slavery 2021 will be celebrated by taking into consideration the people who are suffering from the horrible effects of modern slavery. The 2021 theme for the day is “Ending Slavery’s Legacy of Racism: A Global Imperative for Justice”. The theme reflects the global movement to end injustices whose roots lie in the slave trade. The theme highlights the importance of educating about the history of the transatlantic slave trade and slavery, to bring about an acknowledgment of slavery’s impact on the modern world, and action to address its long-lasting effects. The theme guides the Programme’s development of educational outreach and remembrance to mobilize action against prejudice, racism, and injustice.

Facts About International Day For Abolition Of Slavery

According to the  International Labour Organisation (ILO), more than 40 million people worldwide are victims of modern slavery. In addition, more than 150 million children are subject to child labour, accounting for almost one in ten children around the world. Some are forced to produce the clothes we wear, the food we eat or construct the buildings we live and work in. Poor and marginalized groups in particular racial and ethnic minorities, indigenous peoples, refugees, and migrants are at the highest risk. Women and girls from minority groups are among the most vulnerable of all.

In the words of Secretary-General António Guterres "The COVID-19 pandemic has highlighted the urgency for greater vigilance.  We must ensure decent work and prevent human rights violations across global supply chains. Let us join forces to end the degradation and inhumanity of modern slavery once and for all. "

(The above story first appeared on LatestLY on Dec 02, 2021 11:39 AM IST. For more news and updates on politics, world, sports, entertainment and lifestyle, log on to our website latestly.com).