You can watch Makaravilakku and Makara Jyothi live streaming here. 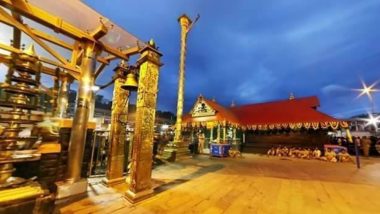 A Sirius star that is visible on the first day of Malayalam month Makaram called Makara Jyothi also graces the sky. Devotees stand with folded palms worshipping the star and singing praises to Lord Ayyappa. Stay tuned with us to watch the event live. Makaravilakku which falls on Makar Sankranti, showcases the transit of Sun into Makara (Capricorn) and expected to take place at 7:52 pm on January 14. Devotees chant 'Swamiye Ayyappo' as Makara Jyothi comes visible in the sky. Makaravillakku at Sabarimala 2019 date: Rituals, Customs And Traditions Attached to the Annual Festival Held on Makar Sankranti.

Ahead of Makaravilakku, Lord Ayyapa is adorned with gold jewellery called Thiruvabharanam. The ornaments which are kept in three sandalwood boxes in Pandalam palace are brought to Sabarimala amid tight police security in a three-day procession that began on January 12. On the way, various temples hold receptions for the procession and carriers of the sacred boxes. Special prayers and rituals are also held as a part of the age-old custom.

Before Makaravilakku, evening prayers are held thereafter the diety with adorned with Thiruvabharnam. The two-month-old pilgrimage season in Sabarimala ends with Makaravilakku. The ornaments will be taken back to Pandalam Valiyakoickal Sree Dharma Sastha temple in a similar fashion on January 23rd.

(The above story first appeared on LatestLY on Jan 14, 2019 06:04 PM IST. For more news and updates on politics, world, sports, entertainment and lifestyle, log on to our website latestly.com).