National Pumpkin Day 2020 Facts: Did You Know Pumpkin Is Not the First Jack-o’-Lantern? 7 Interesting Things About the Winter Squash You May Not Have Known!

On National Pumpkin Day 2020, we would discuss some interesting and lesser-known facts about the winter squash! Did you know pumpkins were not the first jack-o’-lanterns? In this article, we will bring you some of the interesting facts about pumpkins you may not have known. 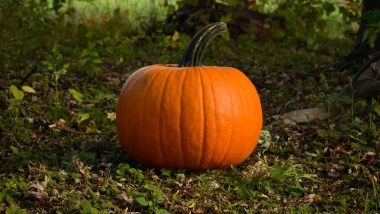 National Pumpkin Day 2020 is on October 26. The day is dedicated to the autumn’s favourite squash—pumpkin. Be it a great fall decoration or some variety of recipes, were are in a frenzy of pumpkin obsession. And with Halloween 2020 approaching faster, the love for pumpkin is only increasing. But we are not here to discuss how awesome recipes do pumpkins make or even for a fall decoration. On National Pumpkin Day 2020, we would discuss some interesting and lesser-known facts about the winter squash! Did you know pumpkins were not the first jack-o’-lanterns? In this article, we will bring you some of the interesting facts about pumpkins you may not have known.

1. The word ‘pumpkin’ showed up for the first time in the fairy tale Cinderella. According to History, a French explorer in 1584 first called them “gros melon,” which was translated into English as “pompions.” It was not until the 17th century that they were first referred to as pumpkins.

2. Fruits are considered to be the part of the plant that has seeds on the inside, which makes pumpkin a fruit and not a vegetable. They are a member of the gourd family, which includes other fruits such as watermelon.

3. Did you know pumpkin is not the first jack-o’-lantern? Many references state that early jack-o’-lanterns were made by carving turnips or potatoes, by the Irish and not pumpkins. In England, people used large beets and lit them with embers to ward off evil spirits. Irish immigrants brought their customs to America, and found that pumpkins were much easier to carve—hence began the tradition.

4. Pumpkins are grown on every continent except Antarctica.

5. The average-size of pumpkin contains about one cup of seeds, which allows people to separate the seeds and roast them to eat it as snacks.

6. The world’s largest pumpkin pie ever made was 20 feet in diameter and weighed 3,699 pounds. It was made by the New Bremen Giant Pumpkin Growers in the USA at the New Bremen Pumpkinfest in Ohio, on September 2010.

7. There are more than 45 varieties of pumpkin. They range in colour like red, yellow and green and even have names like Hooligan, Cotton Candy and Orange Smoothie.

These are some of the most interesting facts about pumpkins that are not known to many. As we celebrate National Pumpkin Day 2020, it is time thank the squash and also carve it, since most pumpkins will hold up a few days before Halloween on October 31.

(The above story first appeared on LatestLY on Oct 26, 2020 08:24 AM IST. For more news and updates on politics, world, sports, entertainment and lifestyle, log on to our website latestly.com).