Rama Ekadashi 2021 Date, Significance & Puja Muhurat: From Puja Vidhi to Vrat Katha, Everything You Need To Know About the Festival

Rama Ekadashi 2021! According to the Hindu calendar, the Ekadashi date of Krishna Paksha of Kartik month is celebrated as Rama Ekadashi. This year Rama Ekadashi fast will be observed on Monday, November 01. On the day of Rama Ekadashi, along with Lord Vishnu, Goddess Lakshmi, the goddess of wealth, opulence and splendor, is also worshiped on this day. 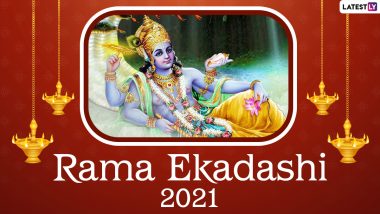 According to the Panchang, the Ekadashi Tithi of Krishna Paksha of Kartik month is starting from 02.27 pm on October 31, till 01.21 pm on the next day, November 1. One can fast on Udayatithi, so Rama Ekadashi fast will be kept on Monday, November 01.

Rama Ekadashi holds special significance in Hinduism. According to religious beliefs, those who observe a fast on Rama Ekadashi and worship Mata Lakshmi along with Lord Vishnu, their home gets rid of misery, poverty and negativity. There is an increase in the happiness, prosperity and wealth of the house. Moksha is also attained by the grace of Lord Vishnu.

(The above story first appeared on LatestLY on Oct 27, 2021 10:55 AM IST. For more news and updates on politics, world, sports, entertainment and lifestyle, log on to our website latestly.com).