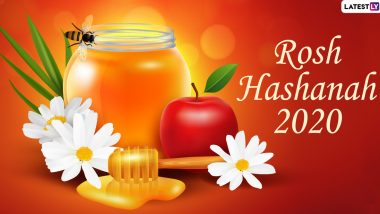 Rosh Hashanah is the Jewish New Year which means the “head of the year” or “first of the year”. It begins on the first day of Tishrei, the seventh month of the Hebrew calendar. The observance corresponds with the Gregorian months of September or October. Rosh Hashanah 2020 begins on September 18 and ends on September 20. The observance was likely established in the sixth century B.C. as the phrase “Rosh Hashanah” shows up for the first time in the Mishna, a Jewish code of law compiled in 200 A.D. The festival is observed by following various traditions, customs, food preparations and a lot more. However, there are a lot of queries about the festival and how it is observed. From 'What is Rosh Hashanah and how is it celebrated?' to 'What do you say after Rosh Hashanah?' here are answers to FAQs. Rosh Hashanah 2020 Dates, Significance And Traditions: Know The Meaning, History, Food, Customs And Greetings Related to the Jewish New Year.

An array of dishes are prepared on the day. People also meet and greet their friends and relatives on the occasion. People greet each other Rosh Hashanah, men tell each other by saying, “Leshana tovah tikatev v’tichatem,” while, women say “Leshana tovah tikatevee v’tichatemee”. The first phrase means “may you be inscribed and sealed for a good year”, and afterwards people wish others a “G’mar chatimah tovah”, which means “a good inscription and sealing [in the Book of Life]”.

What Is Rosh Hashanah and How Is It Celebrated?

Rosh Hashanah is the Jewish New Year that falls on the first day of Tishrei, the seventh month of the Hebrew calendar. It is celebrated by following varying customs and traditions. You can read it here.

What Is the Proper Greeting for Rosh Hashanah?

Is It Appropriate to Say Happy New Year for Rosh Hashanah?

You can wish others a Happy New Year by saying "Shana Tova", which means "good year" in Hebrew. Sometimes people say "shanah tovah u'metukah" which literally translates to "a good and sweet new year". In Hebrew, "Rosh Hashanah" translates to "the head of the year."

What Do You Say After Rosh Hashanah?

After Rosh Hashanah ends, people greeting each other saying 'Gmar chatimah tova'h meaning "A good final sealing", until Yom Kippur. After Yom Kippur is over, until Hoshana Rabbah, as Sukkot ends, the greeting is 'Gmar Tov' that means "a good conclusion".

What is Yom Kippur?

Yom Kippur, also known as the Day of Atonement, is believed to be the holiest day of the year in Judaism. Jews traditionally observe this by fasting for 25 hours attending prayer services. Its central themes are atonement and repentance.  Yom Kippur 2020 will begin on the evening of September 27

and ends in the evening of September 28.

Rosh Hashanah begins by blowing of the Shofar, an instrument made with a ram’s horn. It is believed one must wake up hearing the horn on each morning of the observance. Women light the candles on the evening of Rosh Hashanah and recite blessings. On the second night, they use the flame from existing fire to light more candles while reciting the Shehechiyanu blessing.

(The above story first appeared on LatestLY on Sep 17, 2020 07:00 PM IST. For more news and updates on politics, world, sports, entertainment and lifestyle, log on to our website latestly.com).