Secret Santa is Here: Who Started The Tradition? Know History and Origin of The Anonymous Christmas Gifting Custom

Know the history, origin and about the First Secret Santa. 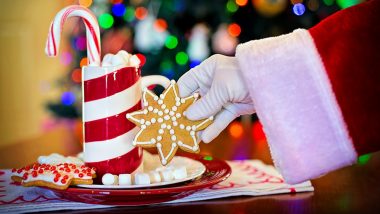 The holiday season has certain gifting traditions associated with them. The end of the year is a jolly time of party and celebrations. The Christmas celebrations are not limited to one day but go until the New Years Eve. And while you may not be a Christian to ring in all Christmas celebrations, you must have been a part of the Secret Santa games. Several corporates, organisations, get-togethers arrange the game of anonymous gifting and the excitement of what you are going to receive, figuring out who must have gifted you remains. But as much as it may seem to be a part of a corporate engagement, there is more history to beginnings of Secret Santa. What is the history of Secret Santa and who was the first one to have started it, let us find out as we reach Christmas 2018. Christmas 2018 Santa Trackers: Google to NORAD, Check Where Does Santa Claus Come From.

Essentially the concept of Secret Santa means anonymous gifting. The roots of this tradition emerge from Scandinavia. It is called as Julklapp, which breaks into "Jul" meaning 'Christmas' and "Klapp" meaning 'to knock.' The tradition goes like knocking loudly on the door, open it and throw the gift or just leave it, without anyone noticing. It was the idea of Knecht Rupert or "Servant Rupert" who helps Santa Claus in delivering the gifts from house to house. In order to give a hint about who would've given the gift, a short funny message is written on the gift. It is a fun tradition which creates the excitement about receiving a gift. Christmas 2018: Who is Santa Claus? Surprising Facts About Father Christmas, Including His Connection With Coca-Cola.

Who Was The First Secret Santa

There is another theory about the first Secret Santa which says Larry Dean Stewart, an American philanthropist. He was better known as Kansas City's Secret Santa. He started a practice of giving small gifts to the poor and unfortunate people. He would give bills of cash and go on spreading kindness. Stewart managed to do all this very secretively. No one knew who was giving out these gifts, despite his kind act being covered by the media several times. His identity was revealed when he was diagnosed with oesophagal cancer in the year 2006. Stewart's acts of kindness were not just in Kansas but also across New York, Mississippi. He died in the year 2007.

Today regardless of knowing the history and origin, Secret Santa has been celebrated in several offices or family gatherings. It has been tagged as a Western culture but it has some philanthropist beginnings with a message of spreading kindness.

(The above story first appeared on LatestLY on Dec 17, 2018 12:32 PM IST. For more news and updates on politics, world, sports, entertainment and lifestyle, log on to our website latestly.com).