Christmas 2018 Santa Trackers: Google to NORAD, Check Where Does Santa Claus Come From

Popular apps like Google and Norad have initiated their Christmas 2018 Santa trackers which are now live so that the kids can find out their Santa. 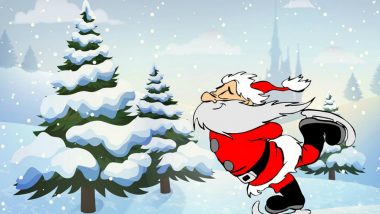 Christmas 2018 is almost here, and the festive freaks cannot keep their calm. Only a few days are left for the jingle bells to ring and there are so much in our to-do list. Starting from decorating the perfect Christmas tree to preparing the mouth-watering delicacies for dinner, there is a lot to do in the festive season. The children looking forward to Christmas mainly because their favourite Santa Claus will be coming to town, bringing gifts for them. Apart from his regular celebratory duty, the man in red will captivate the kids on various apps and websites, through which they can track Santa on the Christmas Eve. Christmas 2018 Costume Ideas: How to Dress Your Kid as a Santa Claus.

Popular apps like Google and NORAD have initiated their Christmas 2018 Santa trackers, which are now live so that the kids can find track his movements on December 25. The websites are done up in the Christmas theme, complete with snow and jingle bells, to give kids the Christmassy feelings. Christmas Cake Recipes 2018: 3 Ways To Make Eggless Cakes This Holiday Season.

Watch How to Track Santa on Google.

Google’s Santa Tracker: Looking its previous commitment to all the festivals, it is definite that the search engine giant would come up with a superb platform to engage the children during Christmas. In 2004, Google launched the Santa Tracker, a website designed to track Santa’s location. The tracker is already live and running with games and artwork. Using the power of Google Earth, the app spreads the magic of Christmas to adults and children alike. Not just till December 25, you will also be able to track Santa throughout the month. Who is Santa Claus? Surprising Facts About Father Christmas, Including His Connection With Coca-Cola.

NORAD Santa’s Village:  North American Aerospace Defense Command (NORAD  has been tracking Santa Claus with its predecessor, the Continental Air Defense Command (CONAD) have been tracking Santa's journey from the north pole for 60 years now.  On the website, there are many games the kids can play while searching for Santa in his village. The website is live, and the countdown for tracking Santa has begun. Once he leaves the North Pole, you can look at his progress through the site. For all the good kids, tracking the man in red will be a time of delight, jubilation and anticipation of beautiful presents under the tree.

Nintendo Santa Tracker: The Nintendo Switch has come up with their very own version to track Santa and it's beautiful. Onteca’s Santa Tracker will let the young at heart see where in the world Santa Claus is. Apart from the fun scenario, the users will also receive exclusive stories from the North Pole.

It’s Christmas, and it is only great to indulge in some extra-festive virtual fun this year. So, without looking any further, explore these apps and websites and track down Santa. Here’s to the holiday season. Merry Christmas!

(The above story first appeared on LatestLY on Dec 13, 2018 06:02 PM IST. For more news and updates on politics, world, sports, entertainment and lifestyle, log on to our website latestly.com).