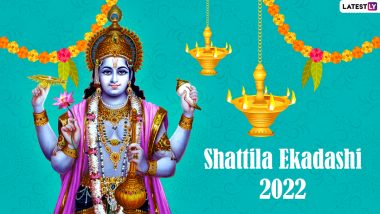 Shatila Ekadashi shubh muhurat will begin from 02:16 pm on January 27 and will end on January 28 at 11:35 pm. In such a situation, Ekadashi fast will be kept on Udaya Tithi on January 28.

The use of sesame on the day of Shatila Ekadashi has special significance. It is said that on this day six types of sesame bath, ubtan, tarpan, donation, consumption and sacrifice destroy sins.

1. On this day the person fasting should wake up early in the morning and take a bath.

2. After this the place of worship should be cleaned. Now the idol or picture of Lord Vishnu and Lord Krishna should be installed.

4. During the worship, one should recite the hymns of Lord Krishna and Vishnu Sahasranama.

5. Prasad, Tulsi water, fruits, coconut, incense sticks and flowers should be offered to the deities.

6. The next morning i.e. on Dwadashi, after consuming food post worship, the Shattila Ekadashi fast should be broken.

According to a legend, a woman had plentiful wealth. She used to donate a lot to poor people. She used to donate a lot to the needy. She used to distribute valuables, clothes and lots of money to them. But she never gave food to the poor. It is believed that among all the gifts and charity, the most important is the donation of food as it bestows great virtues on the person donating. Seeing this, Lord Krishna decided to tell this to the woman. He appeared in front of the woman as a beggar and asked for food. But that woman refused to give food in charity and shunned God as poor. This story of Shattila Ekadashi fast teaches us the importance of donation.

(The above story first appeared on LatestLY on Jan 27, 2022 12:54 PM IST. For more news and updates on politics, world, sports, entertainment and lifestyle, log on to our website latestly.com).