Social Media Giving Day 2020: Date And Significance of the Day To Promote Social Media as a Means to Support Charities and Create Awareness on Fundraising 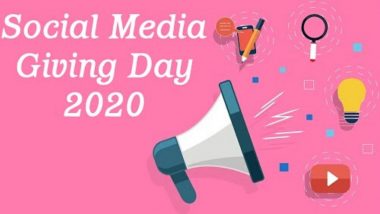 Social Media Giving Day is observed on July 15 every year. The day was inaugurated by Givver.com, a platform dedicated to fundraising via Twitter, in 2013. Givver.com is a non-profit organisation founded by Chris Sommers. The platform focussed on encouraging social media users to donate via social networks, namely Twitter.

Givver reportedly spent more than five months working with elected officials around the country and social media influencers to promote the day in such a manner so as to use social media for good cause. The intension was also to leverage social media as a means to hashtag “give” or donate to their favourite charity or cause. Governors and Mayors around America declared July 15 as “Social Media Giving Day”.

July 15 every year is celebrated as the Social Media Giving Day. This year, the day falls on a Wednesday.

The coronavirus pandemic has affected each of us and due to the lockdown, there have been several businesses that have permanently shut their shops. There are many who that have faced job losses, salary cut and furloughs. Hunger, poverty, domestic violence, and abuses have shot up. So on this occasion, let's all come together and use social media to run charities and help others in these tough times.

(The above story first appeared on LatestLY on Jul 15, 2020 08:30 AM IST. For more news and updates on politics, world, sports, entertainment and lifestyle, log on to our website latestly.com).