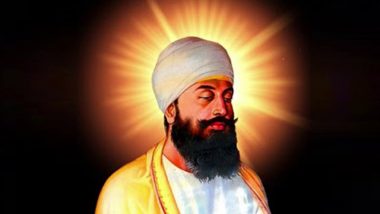 The year 2020 marks the 400th Parkash Purab of Sri Guru Tegh Bahadur, the ninth guru of Sikhs. According to Gregorian calendar, Sri Guru Tegh Bahadur was born on April 1, 1521. However, as per the Nanakshahi calendar followed by the Sikh community, the Parkash Utsavb of the ninth guru will be celebrated on April 18. Guru Tegh Bahadur was born on Vaisakh Vadi 5, (5 Vaisakh), Bikrami Samvat 1678, in Amritsar to Guru Hargobind Singh ji, the sixth Guru of Sikhs and Mata Nanaki ji. Sri Guru Angad Dev Ji Parkash Purab 2020: Facts To Know About Second Guru of Sikhs On His 516th Jayanti.

Guru Teg Bahadur ji sacrificed his life for protecting people of other religion. When thousands of Kashmiri Pandits were massacred, and their property was looted on the orders of the then ruling Mughal emperor Aurangzeb, they visited Guru Tegh Bahadur for help. The ninth guru than Guru Sahib made up his mind to sacrifice himself for the cause of “Righteousness” and the freedom of “Dharma”. He was also trained in horsemanship, swordsmanship, javelin throwing and shooting.

(The above story first appeared on LatestLY on Apr 01, 2020 08:00 AM IST. For more news and updates on politics, world, sports, entertainment and lifestyle, log on to our website latestly.com).