Trafalgar Day 2020: Know Date, History and Significance of the Day That Marks Victory of Royal Navy Over French and Spanish Fleets at the Battle of Trafalgar

After the formation of Navy League in 1894, movement for recognition of Lord Horatio Nelson's legacy got added impetus, Trafalgar Square in London witnessed grand celebrations on Trafalgar Day in 1896. Officers commissioned at Royal Navy celebrate the victory of the Battle of Trafalgar by holding Trafalgar Night dinner on October 21 every year. 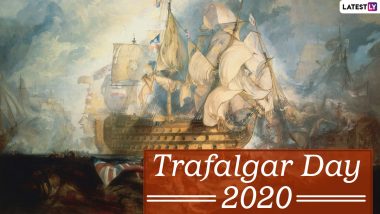 Mumbai, October 20: Trafalgar Day is celebrated annually on October 21. The day marks the victory of British Royal Navy over Spanish and French fleet, in the Battle of Trafalgar fought in 1805. The Royal Navy was led by Lord Horatio Nelson during the famous naval clash. Then Vice-Admiral in Royal Navy, Lord Horatio Nelson, emerged as one of Britain's most famous war heroes.

The Battle of Trafalgar was fought by British Navy in Cape of Trafalgar, located close to Spain's Cadiz city. The Royal Navy had valiantly took on a combined force of French and Spanish fleets. There was a feeling of unrest in Britain in period leading to the battle, as an attack by the Napoleon Bonaparte-led France was thought to be imminent. The vicious conqueror of his time, Napoleon, had already laid siege to large parts of Europe and Britain was apparently next on the list. At this time of crisis, Lord Horatio Nelson stepped up to take charge of the British fleet that ultimately succeeded in defeating the French Navy.

Lord Horatio Nelson took a bullet in his back from a French sniper while he was aboard The Victory, the ship leading the attack. Nelson was taken below the deck of the ship to get treatment, but later lost his life. Before he died, he was informed by his fleet that they have stood victorious against the Spanish and French Fleet. After the news of triumph reached British shores, grand celebrations were held in the country and a special performance was organised at the Royal Theatre to highlight Nelson's heroics. Trafalgar Square: Thousands Without Mask Turn Up at Anti-Vaccine, Anti-Lockdown Rally in Heart of London.

After the formation of Navy League in 1894, movement for recognition of Lord Horatio Nelson's legacy got added impetus, Trafalgar Square in London witnessed grand celebrations on Trafalgar Day in 1896. Officers commissioned at Royal Navy celebrate the victory of the Battle of Trafalgar by holding Trafalgar Night dinner on October 21 every year.

Trafalgar Day is continued to be celebrated by Commonwealth of Nations. In Australian town of Trafalgar, The Battle of Trafalgar Festival with Trafalgar Day Ball is held on closest Friday and Saturday of October 21 every year. In New Zealand, the victory is celebrated in Nelson's Trafalgar Square.

The grandest Trafalgar Day celebration was witnessed in 2005 -- the year which marked 200th anniversary of the British triumph in the naval war. Queen Elizabeth II, who was the guest of honour that year, led the bicentennial commemorations as she raised the traditional toast during the Trafalgar Night banquet. The event continues to hold equal importance for nationalist Brits to this date.

(The above story first appeared on LatestLY on Oct 20, 2020 06:00 PM IST. For more news and updates on politics, world, sports, entertainment and lifestyle, log on to our website latestly.com).