Turkey Trot: Everything You Must Know About the Tradition in the US Before the Thanksgiving 2021 Arrives!

The tradition of trotting during that time has garnered the fun and the family-friendly vibe that it is popularly known for today. Men, women and children take to streets in turkey, pilgrim or other autumnal-seasoned ensembles to celebrate the race. 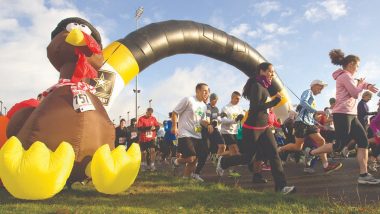 Turkeys remain the centre of attraction for all Americans during Thanksgiving dinner as they traditionally consume the eatery to celebrate Thanksgiving Day in the United States. However, the calorie intake of an average American around that time increases to the stage that Turkey Tots come into place! These are races or marathons held on or around Thanksgiving Day in the US, where people run to burn their calories in a comic and funny manner.

Every year, a fun run or a footrace is held for participants looking forward to a calorie-burning yin to their Thanksgiving dinner's Turkey yang. People dress in funny costumes, styled as a turkey and participate in the race with full zeal and enthusiasm. The practice goes back to 1896, when the Buffalo YMCA Turkey Trot came into existence. Being one of the oldest foot races in North America, the Buffalo race has evolved over time, but its distance of five miles still remains the same. The tradition of trotting during that time has garnered the fun and the family-friendly vibe that it is popularly known for today. Men, women and children take to streets dressed as turkeys, pilgrims or other autumnal-seasoned ensembles to celebrate the race. Thanksgiving 2021: Rising Inflation in The US Likely to Put a Dent on Consumer's Wallet During Upcoming Festive Season.

The Berwick Run for the Diamonds or the 10K Cincinnati Thanksgiving Day Race are the two other races that've been prominent in practicing the local tradition for more than a century. While talking about the number of participants that appear for the Turkey Trot every year, it's highlighted that the marathon attracts thousands of people to make it to one of the most organized runs of the year in the US. With each iteration introducing its own elements in the race, common themes of fun, family-friendliness and often charity emerges intact with people focusing more on the ritual of the trot and the togetherness it inspires among the Americans.

Even COVID-19 couldn't stop people from practising the tradition of Turkey Tot as the race was conducted by keeping an in-person field to a meagre 125 selected runners, who ran to celebrate the day amidst the coronavirus pandemic. This year as the US celebrates Thanksgiving day on November 25, Monday, it'll be interesting to watch how people gather for Turkey Trot races to celebrate their most-awaited run of the year.

(The above story first appeared on LatestLY on Nov 15, 2021 12:56 PM IST. For more news and updates on politics, world, sports, entertainment and lifestyle, log on to our website latestly.com).