When Is Muharram in Saudi Arabia? What Is Ashura? Know Moon Sighting Date and Significance of the First Islamic Month

Muharram, the first month in Islamic calendar, marks the beginning of the Islamic new year. It is believed that Muharram is the second holiest month after Ramadan. 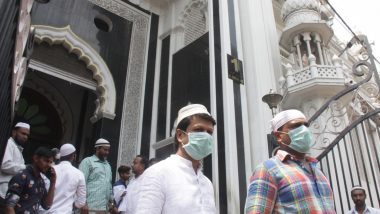 Riyadh, July 27: Muharram, the first month in Islamic calendar, marks the beginning of the Islamic new year. It is believed that Muharram is the second holiest month after Ramadan. Tenth day of Muharram is known as the Day of Ashura, which assumes significance for Muslims worldwide. Muslims in Saudi Arabia will welcome the arrival of first Islamic month in August. Scroll down to know likely date for Muharram beginning and its significance. Is Muharram Celebrated as Festival? Why Do Muslims Self-Flagellate on Ashura? When Will Muharram Chand Appear? All FAQs Answered.

Islamic or Hijri calendar is based on lunar cycle. A new month begins when the moon is sighted on 29th of the ongoing month. If the crescent remains invisible on 29th, the ongoing month completes 30 days and a new month starts the next day.

When Is Ashura in Saudi Arabia?

Muharram is the first month of Islamic calendar. It is one of the four sacred months of the year when warfare is forbidden. It is also considered the second holiest month after Ramadan. Besides other important events, the Battle of Karbala, which resulted in the martyrdom of Hussain, the grandson of Prophet Mohammed, was also fought during this month.

(The above story first appeared on LatestLY on Jul 27, 2021 05:37 PM IST. For more news and updates on politics, world, sports, entertainment and lifestyle, log on to our website latestly.com).