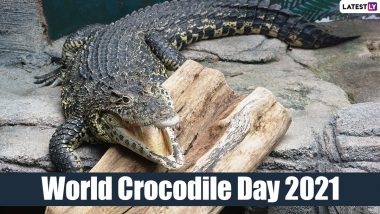 World Crocodile Day is celebrated on June 17th to raise awareness about the need to save these endangered species from extinction. Land encroachment, Dredging,  pollution, culling and invasion of other aggressive species, can lead to mass-scale extinction of these reptiles. It was reported that more than half of the world’s 27 species of crocodiles face the danger of extinction due to human activity. The gharial, a distinctive long-nosed species that eat fish, in India, The Philippines crocodile and the Chinese alligator are on the critically endangered list and face the dire straits of being wiped out due to habitat destruction and being intensively farmed for meat and leather. Crocodiles are also culled in India, due to the human-crocodile conflict.

These semi-aquatic aggressive species are one of the most feared carnivorous on this planet. Crocodiles have been around for millions of years and unlike the dinosaurs, have managed to survive extinction. it is imperative that we save these species from being completely wiped out from the earth. Here are a few interesting facts to learn and share about crocodiles, so you are more aware of the need to save these species from certain doom.

(The above story first appeared on LatestLY on Jun 17, 2021 09:23 AM IST. For more news and updates on politics, world, sports, entertainment and lifestyle, log on to our website latestly.com).