As per the Google date, an estimated five billion pizzas (350 slices per second in the U.S. alone) are consumed internationally each year. 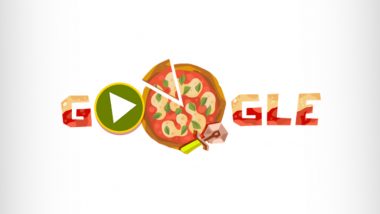 Mumbai, December 6: On this day, in 2007, UNESCO inscribed the culinary Art of Neapolitan 'Pizzaiuolo' on the Representative List of the Intangible Cultural Heritage of Humanity. To mark the day, Google rolled out an interactive animated game for its users.

The interactive game features the most beloved pizza toppings from all around the world. As you start to play, you are challenged to cut slices based on the type of pizza ordered. paying close attention to the toppings and number of slices ordered while cutting the pizza will earn you more stars. The game showcases in total 11 beloved pizza toppings, including the Desert pizza as a bonus round! To play the pizza cutting game, all you have to do is click on Google logo on the home page of Google, and you are good to go!  Selamat Hari Guru! Teachers’ Day 2021 in Indonesia Gets Commemorated With Cute Google Doodle (View Pic).

“Although flatbread with toppings has been consumed for centuries in ancient civilizations from Egypt to Rome, the southwestern Italian city of Naples is widely credited as the birthplace of the pizza known today (dough layered with tomatoes and cheese) in the late 1700s,” said Google while bringing up the history of pizza.  As per Google, an estimated five billion pizzas (350 slices per second in the U.S. alone) are consumed internationally each year.

(The above story first appeared on LatestLY on Dec 06, 2021 09:54 AM IST. For more news and updates on politics, world, sports, entertainment and lifestyle, log on to our website latestly.com).