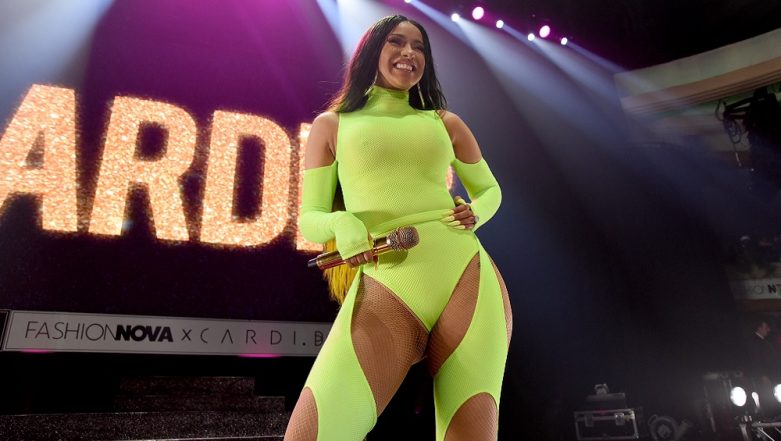 Washington DC, May 10: American rapper Cardi B, who never shies away from speaking her mind, recently revealed that she underwent liposuction in the months following the birth of her daughter Kulture. The artist, known for her candid nature, pleasantly surprised her fans when she openly talked about liposuction, saying she doesn't like "lying about things.

"It is no secret that there is a stigma surrounding the procedure. However, Cardi told E! News at the launch of her second Fashion Nova collection, "It was important for me because I don't like lying about things." In an effort to be honest with her fans, the 26-year-old rapper plans on sharing more about the weight-loss process, which, she said, took months. Cardi B Goes Almost Nude in an Explicit Video on Instagram for the Trolls Who Circulated Her Billboard Music Awards Red Carpet ‘Wardrobe Malfunction’ Pictures.

"Like when you see somebody that had lipo you think that they just go into the doctor's and like boop, you come out and you look amazing, but it's actually like a very long process, recovery," she shared of the procedure. "It actually takes like a little bit more than three or four months," the rapper added. The 'I Like It' rapper continued, "The stages are very frustrating. Sometimes it gets a little bit discouraging."

The weight-loss procedure also requires frequent massages to maintain the body's physique during the recovery process. However, even after months of careful healing, Cardi said the end result "might not come out how you want it to be." Speaking about the overall result, the artist shared that she is "enjoying" the slimmer figure she has attained now. Cardi also revealed that she doesn't enjoy when people accuse her of ab sketching.

"No no no. I've always had abs and I'm a very skinny person so when they taking extra fat out and your skin is tightening more, it's like my bones are actually showing more," she said. There is no denying that the rapper looked all healthy and fit, especially in the stunning dress she wore at the 2019 Met Gala pink carpet, which made heads turn. It was Cardi's second time attending the fashion event and she is always amazed by the couture fashion at the celebration.

She said, "It was even more beautiful, more shiny in persona and I just was like, 'Wow, dope'. "Her recently launched collection of Fashion Nova features pretty shades of pastel pinks which are perfect for this summer season. On the work front, Cardi is soon going to make her film debut with an upcoming drama titled 'Hustlers' alongside Jennifer Lopez, Constance Wu, and Lili Reinhart. 'Hustlers' is slated to release on September 13, 2019.