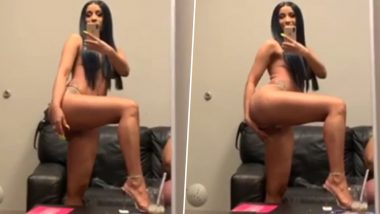 Cardi B can't stop, won't stop! She has always given it back to the trolls and this time her reply to the people who circulated her photoshopped image from her appearance at the Billboard Music Awards was a clear STFU from her side.  While her nude video reply to the trolls has been removed by Instagram, the way she handled the whole controversy is grabbing eyeballs everywhere. Here's a little backstory: Cardi appeared in a yellow thigh-high slit dress at the red carpet of Billboard Music Awards in Las Vegas, Nevada, and posed passionately for pictures with Offset, however, in one of the rather NSFW pictures where she raised one of her legs flashed tiny underwear she was wearing underneath. However, trolls photoshopped the picture to make it look like she wasn’t wearing any. But Cardi B being Cardi B took on to Instagram to answer the trolls in the most explicit manner. The I Like It hitmaker stripped off to just a tiny thong and pointed out at her genitalia during and went on a rant about how the trolls doctored her Las Vegas red carpet picture and circulated it online. The Bodak Yellow singer, Cardi B has always been the woman who gives it back to such trolls, however, this time she went above and beyond to prove her point. Cardi B’s Butt Looks Smaller in Dan Bilzerian’s Instagram Post! Internet Trolls Him for ‘Photoshopping’ Her Picture.

She can be heard saying in the video, "Y'all motherf***ers going around showing this f***ing picture now y'all photoshopping it even more." She continued to rant with a reference to her vagina and said, "This right here is where I birthed my daughter from. This right here the part when I go like this, that's just my a**. You know when you got the fat a**."

"Y'all wanna look at my p**** so bad, you should have seen me when I was a motherf***ing stripper and I was promoting myself like "come see me!" Now too bad!," she continued with a little cameo of Travis Scott's arms in the video. However, now the video is supposedly taken down by Instagram because it isn't available on Cardi B's profile anymore.

However, we found the explicit video of Cardi B on Youtube. Take a look:

Cardi B has always been the person who wears her heart on the sleeves and this time when it was about desperate trolls doctoring her photos, she didn't hold it in.

(The above story first appeared on LatestLY on May 03, 2019 10:05 AM IST. For more news and updates on politics, world, sports, entertainment and lifestyle, log on to our website latestly.com).