From cures of Coronavirus to lockdown measures, we have tackled some bizarre claims that sent tongues wagging on the internet. The fake news encircled some big names like industrialist Mukesh Ambani to Russian President Vladimir Putin. We give you a list of widespread fake news of 2020 along with a fact check that proves them wrong. 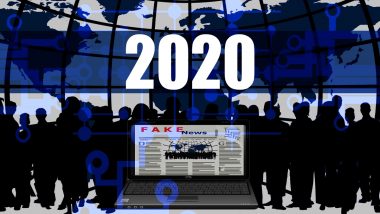 The year of 2020 is wrapping up and couldn't we be any more happier? Through all its disasters and a pandemic that went on for a year, 2020 will stay memorable as a part of history to many. Keeping updated with the news became so important this year, because there was so much constantly happening together. The bushfires, the cyclones, the floods, the insects taking over and so much more. And along with it the fake news cycle! As much as people looked up the news for updates, they had equal reports of fake news being circulated over social media platforms like WhatsApp, Facebook, Twitter and more. From cures of Coronavirus to lockdown measures, we have tackled some bizarre claims that sent tongues wagging on the internet. The fake news encircled some big names like industrialist Mukesh Ambani to Russian President Vladimir Putin. We give you a list of widespread fake news of 2020 along with a fact check that proves them wrong. Know How to Be a Corona Warrior and Not a Fake News or Hate Virus Carrier! Else, We on Social Media and News Channels Will Bring the Doomsday Soon.

In the early start of the COVID-19 disease, while it was still categorised as an epidemic, there were many fake reports regarding coronavirus, its symptoms, the lockdown measures in place and so on. One bizarre report among them was Russian President Vladimir Putin releasing 800 tigers and lions on streets to ensure people do not step out of their homes! A picture of lions on street was also shared along with. Similar tweets were shared online and with a news as scary, it did go viral. But we did a fact-check and found out that the picture attached with the claim dated back to 2016!

RUSSIA Vladimir Putin has Dropped 800 tigers and Lions all over the Country to push people to stay Home.. Stay Safe Everyone! https://t.co/41KOjl8vNe

Italy was the worst-affected nations by COVID-19 with a steep death toll. But did it bring the Italian PM or President to cry on camera? No. A fake claim did the rounds online of Italian President crying after bodies piled up following the coronavirus outbreak. The same picture was also circulated with another claim that Italian Prime Minister Giuseppe Conte broke down after failing to contain the spread of coronavirus. However, when we did a fact-check on the claim. It turned out to be a picture of Jair Bolsonaro, President of Brazil captured during an evangelical Thanksgiving service in 2019.

In July, a piece of satire on Budweiser beers caused panic as people thought it to be real. A report published on foolishhumour.com posted an article with the headline, "Budweiser employee acknowledges having been pissing into beer tanks for 12 years." The news was posted on another website and soon it spread on social media. While some reacted with funny memes and jokes on beer drinkers, we pointed out that it was a satire piece.

One of the greatest Indian industrialist names in the world, Reliance Chairman Mukesh Ambani became a target of a fake report of suffering from cancer. Several tweets mentioned of his weight loss caused due to his pancreatic cancer. There was even a mention that he has undergone liver transplant in London. LatestLY reached out to Corporate Communications Team of Reliance Industries who confirmed that it was fake news.

Not exact statistics, but every second person who uses WhatsApp sends/receives Good morning messages, images and greetings regularly. Mid-year, a claim stating that sending good morning or goodnight messages would steal one's data from phone. However, LatestLY did a fact-check on this message and it turned out to be another falsely created forward.

"Please do not send good morning wishes/messages". I swear at this point I'm going to throw my phone in the bin. pic.twitter.com/lqwyFXOXsj

A video of supposedly Bahrain's Emir Hamad bin Isa Al Khalifa, in Dubai went viral for his robot bodyguard. The giant robot did attract a lot of curious eyes on the internet who believed the claims. As the video went viral, we did a fact-check on it and revealed it was a video from exhibition in 2019. In fact, the person in the video wasn't Emir of Bahrain at all.

These are some of the major news, reports and videos that went viral with fake claims on social media. But these were not the only one. The onset of coronavirus churned so many more fake reports. There were fake messages like inhaling hot steam would kill the COVID-19 virus. In yet another bizarre kind of news, a video of a dinosaur puppet from China was thought to be a real dinosaur. Tweets claiming China making a real dinosaur clone scared the internet. As a responsible media organisation, LatestLY tried to track down the original sources of these reports and did a fact-based fact check on these viral pieces of news. For all such fact-checks visit the Fact-Check Section. And as a responsible consumer of news and a user of social media, it becomes your duty to verify whatever that you see on the internet before passing it on. Let us take that lesson from 2020!

(The above story first appeared on LatestLY on Dec 28, 2020 05:45 PM IST. For more news and updates on politics, world, sports, entertainment and lifestyle, log on to our website latestly.com).