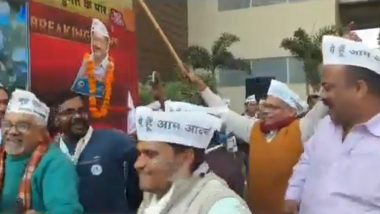 In one such victory procession in Lucknow, whose video was uploaded on social media, the AAP workers and supporters could be seen dancing on Rinkiya Ke Papa. The clip, said some Twitter users, was akin to adding insult to the BJP's decisive defeat in the Delhi assembly elections 2020.

Celebrations at AAP Lucknow Unit. Workers dancing away to the tunes of 'Rinkiya Ke Papa' 😂😛 pic.twitter.com/e3jBFy3H9w

Rinkiya Ke Papa was released as part of an album -  ‘Uparwali Ke Chakkar Mein' - in 2012. The song was used by both the AAP and the BJP during the campaign trail for Delhi. While the latter attempted to galvanise support among Uttar Pradesh and Bihar migrants using the Bhojpuri song, the Kejriwal-led party apparently mocked Tiwari through the song.

In the results declared today by the Election Commission, the AAP ended up winning 62 out of 70 seats in the national capital, whereas, the BJP was restricted to 8 assembly segments. The results are marginally different from 2015, when Kejriwal had recorded a victory in 67 constituencies and the BJP was restricted to 3 seats. The Congress has consecutively drawn a blank.

(The above story first appeared on LatestLY on Feb 11, 2020 09:48 PM IST. For more news and updates on politics, world, sports, entertainment and lifestyle, log on to our website latestly.com).