Vanga is said to have foretold major events like 9/11 terror attacks and Brexit, in a series of mystical predictions, as far forward as 5079. Now, in the wake of Russia launching a devastating attack on Ukraine, one of Baba Vanga's prediction has gone viral again. 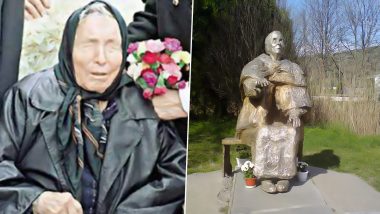 Humans are generally curious about the future. Baba Vanga, who is also known as the Nostradamus of the Balkans, might have left the world 26 years back at the age of 85 but her predictions continue to live till date. For the unversed, the clairvoyant from Bulgaria is very famous among conspiracy theorists for predicting global events way before they happened. Vanga is said to have foretold major events like 9/11 terror attacks and Brexit, in a series of mystical predictions, as far forward as 5079. Now, in the wake of Russia launching a devastating attack on Ukraine, one of Baba Vanga's prediction has gone viral again.  Ghost of Kyiv: Unconfirmed Ukrainian Pilot Hailed For Reportedly Shooting Down 6 Russian Jets

Baba Vanga, had told writer Valentin Sidorov that Russia would become the 'lord of the world ' whereas Europe would become a 'wasteland', according to a report in Daily Mail UK. As per Birmingham Mail, she said, "All will thaw, as if ice, only one remain untouched Vladimir's glory, glory of Russia." She had further added, "Too much it is brought in a victim. Nobody can stop Russia."

Vanga had reportedly also said, "All will be removed by her from the way and not only will be kept, but also becomes lord of the world."

Throughout her 50-year career Vanga had made thousands of forecasts despite being blinded as a child due to a tornado. She predicted in August 1999 that the Russian nuclear submarine Kursk would be flooded and the entire world would mourn. The submarine sank in the Barents Sea in August 2000, killing all of the crew.   Nuns Playing Football Video Goes Viral! Watch a Bunch of Spirited Sisters Enjoy Kickabout On Small Soccer Court In Italy

Born in 1911, Vanga had mysteriously lost her eyesight at the age of 12 during a massive storm. Theories say that the tornado that lifted her dashed her to the ground leaving her blinded with dust, in turn, bestowing her with the power to see the future.

Vanga has left behind predictions that run until 5079. She believed that the world would end by this year. She reportedly had a success rate of 85 per cent in her predictions.

(The above story first appeared on LatestLY on Feb 26, 2022 01:56 PM IST. For more news and updates on politics, world, sports, entertainment and lifestyle, log on to our website latestly.com).