Rosé's solo music video teaser was released, and in less than 24 hours, the clip earned over 10 million views on YouTube. Fans, called Blinks, are thrilled and eagerly waiting for the full song which is set to hit on the day of the group’s live streaming concert. 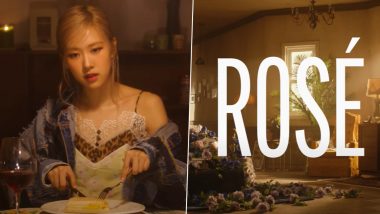 The K-Pop music bands are setting newer milestones with each passing day. And the girl group, Blackpink, is dominating the music trends and how. Recently, member Jennie’s song, ‘SOLO’ hit 600 million views on YouTube, making her the first K-Pop female whose solo music video achieved the number. Now, another member Rosé is gearing up to create new records, and she seems to have started already. Her solo music video teaser was released on January 25, and in less than 24 hours, the clip earned over 10 million views on YouTube. Yes, you read that, right! We can clearly get the hype created around the music video. Fans, called Blinks, are thrilled and eagerly waiting for the full song which is set to hit on the day of the group’s live streaming concert.

Blackpink never fails to keep their fans hooked, and the Blinks always share their love and support to the group, no matter what. When member Jennie opened her YouTube account on her birthday, the first video crossed over six million views in just a day. This shows their popularity among fans, who now patiently wait for their stage presence and powerful voice. The K-Pop girl group is now all set for the much anticipated online concert, The Show. Members Jisoo, Jennie, Rosé, and Lisa are expected to give some thrilling performances on the show, which is on January 31, 2021.

The group’s agency YG Entertainment confirmed that Rosé would perform her solo track for the first time during the upcoming concert. While fans will have to wait for a few more days, the singer teased BLINKs with a short teaser. The clip features distraught Rosé lying on the bathroom floor and then dinning alone in the kitchen while a snippet of her solo track plays in the background. As the camera gets closer, you hear her soulful voice, “All my love is gone.”

It appears as the track will focus on longing for love. But cannot anticipate much as the K-Pop group is known for their powerful, inspiring yet soulful lyrics. Blinks are going crazy over the teaser video. In less than 24 hours, the clip surpassed over 10 million views on YouTube, and the number is only growing.

Blinks Are Happy and Proud!

Reminder that Rosé said she wanted fans to dance when we heard her solo. Since we now know the teaser song will be the sub-title track, that means a dance pop title track is coming! @blackpink pic.twitter.com/PZJ0KkRykt

ROSÉ's Teaser has officially surpassed 10M+ views and 2.2M likes in YouTube in just 16 hours! Everybody's tuning in as they should! 🔥 @BLACKPINK pic.twitter.com/t53ossEkAU

Blackpink’s online concert The Show will be streamed live on January 31, 2021. Meanwhile, Rosé has finished the shooting of the music video for her solo album’s title track in mid-January. Fans are excited and cannot wait to hear her solo song! Rapper Lisa is reportedly next to drop new music.

(The above story first appeared on LatestLY on Jan 26, 2021 02:59 PM IST. For more news and updates on politics, world, sports, entertainment and lifestyle, log on to our website latestly.com).