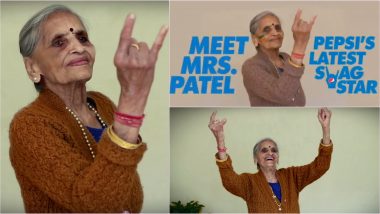 Ahead of India vs New Zealand World Cup 2019 clash, Pepsi came up with an inspiring video featuring Indian cricket fans. In the video, a popular fan of the Indian cricket team, 87-year-old Charulata Patel, appeared to cheer for Virat Kohli and boys for their upcoming battles in CWC World Cup 2019 tournament. The video was titled as ‘Pepsi Fan Anthem’ by the soft drink brand. CWC 2019: Virat Kohli & Kane Williamson to Clash Once Again After the 2008 U-19 WC in Semi-Finals.

Having tag line 'Har Fan Mein Swag, Har Ghoot Mein Swag', the fan-anthem celebrates the swag of Indian cricket fans. In the video, many fans of the Virat-led side can be seen cheering for the men in blue with interesting dance steps on a lovely beat. Have a look at the video below, which was released on the YouTube channel of T-series.

The limelight of the video is Charulata Patel, as the old lady makes a special entry into the video at the end, voicing some interesting dialogues. 'Swag saras chhe, Pepsi Saras Chhe' (Swag is good, Pepsi is good), the much-popular fan of Indian cricket says in the end while gesturing ‘swag signature’ with her hands. Charulata Patel, 87-Year-Old Fan, Attends India vs Sri Lanka CWC 2019 Match Thanks to Virat Kohli (See Pic).

Patel became an overnight sensation after she was seen cheering for the India team in their CWC 2019 match against Bangladesh, which the men in blue won by 28 runs. The old lady was applauded by all for her dedication towards the sport, and even Kohli, Rohit Sharma among other cricketers met and greeted her after the match.

(The above story first appeared on LatestLY on Jul 09, 2019 12:08 PM IST. For more news and updates on politics, world, sports, entertainment and lifestyle, log on to our website latestly.com).