Dharavi Praised by WHO For Containing COVID-19 Cases, Twitterati Says Slum-Dwellers Set Example For the Rest to Follow; Check Tweets 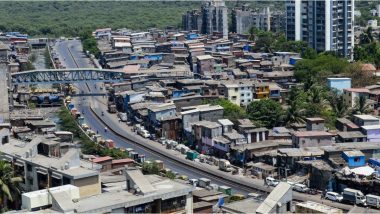 The World Health Organisation (WHO) praised the efforts taken to contain the spread of coronavirus in Mumbai’s Dharavi. WHO chief Tedros Adhanom Ghebreyesus said that the outbreak despite its intensity has successfully been controlled in Dharavi which is Asia's largest slum that has a population density of 2.27 lakh per sqm. As the news went viral, people took to Twitter praising the control measures taken that earned praises from the international public health organisation. Tweets appreciating the model of combating and controlling the deadly virus in the slum has gone viral. We bring to you some of the tweets thanking the health department and government officials for making a difficult job possible. The announcement came after only one new case was reported from Dharavi. Twitterati is of the opinion that Dharavi, the biggest slum in Asia set an example for the rest on containing the virus. Dharavi Gets Praise From WHO For Breaking COVID-19 Transmission Chain, Aaditya Thackeray Lauds 'Dharavikars' For Chasing Coronavirus.

Tedros Adhanom Ghebreyesus, WHO DG, "There are many examples from around the world that have shown that even if the outbreak is very intense, it can still be brought back under control." While the COVID-19 curve is rising in the rest of Mumbai, Municipal Corporation of Greater Mumbai (MCGM) seems to have gotten a grip over the cases in the slum.

WHO Tweets on COVID-19 Cases Decline in Mumbai's Dharavi:

"In 🇻🇳🇰🇭🇹🇭🇳🇿🇮🇹🇪🇸 & 🇰🇷 & even in Dharavi, a densely packed area in Mumbai, a strong focus on community engagement & the basics of testing, tracing, isolating & treating all those that are sick is key to breaking the chains of transmission & suppressing the virus"-@DrTedros

Corona has shown the world

Not belliting someone just bcoz they are poor

The slum has fought and won

Kudos to The People Who Were Supportive:

#Dharavi the Asia's largest slum has only tested one positive case till now.

Someone has rightly said that having money doesn't mean you are intelligent. Thousands of stupid rich people are roaming without mask whereas Dharavi people are using their brains, taking precautions. pic.twitter.com/2cF4WezAnG

If #dharavi could, everyone can ,the idea is extensive surveillance, testing , testing & testing, focus on contact tracing & isolation ! That’s the only model that will isoloate the virus from spreading! In #Gujarat we need to quadruple the testing to begin with @nishantchotai https://t.co/3w7hb60wB6

Praises Pour in For The People of Slum:

Good to hear that Dharavi is covid free.

5 6 people living in a room and still Defeat corona.The people of Dharavi have given an example that if you are careful you can beat the corona

If Dharavi can become Covid free then why other cities having less density of population than Dharavi are lacking behind, formula applied in Dharavi should be tried in other areas of Mumbai & other MMR regions such as @KDMCOfficial #Dharavi

When the world is struggling to lower the number of covid-19 cases,

This news is something worth noticing.

Only #1 case has reported in Asia's largest Slum #Dharavi today.#Dharavi Being such a crowded place, people are taking necessary precautions to combat this deadly virus. pic.twitter.com/QIfiQX2Lc5

You guys have set an example #dharavi

From a hotspot to global acknowledgement 🙌 https://t.co/g0wIoMSEt8

WHO chief said, "And some of these examples are Italy, Spain and South Korea, and even in Dharavi a densely packed area in the megacity of Mumbai a strong focus on community engagement and the basics of testing, tracing, isolating and treating all those that are sick is key to breaking the chains of transmission and suppressing the virus." The total number of COVID-19 cases in India reached 7,93,802 on Friday, according to the Union Ministry of Health and Family Welfare. Out of the total number of cases, 2,76,685 are active while 4,95,513 have been cured/discharged/migrated and 21,604 have died.

(The above story first appeared on LatestLY on Jul 11, 2020 01:12 PM IST. For more news and updates on politics, world, sports, entertainment and lifestyle, log on to our website latestly.com).