EXO's Chen aka Jongdae Reveals in a Handwritten Letter That He Is Getting Married to ‘Pregnant’ Fiancée ; Says 'A Blessing Came My Way' 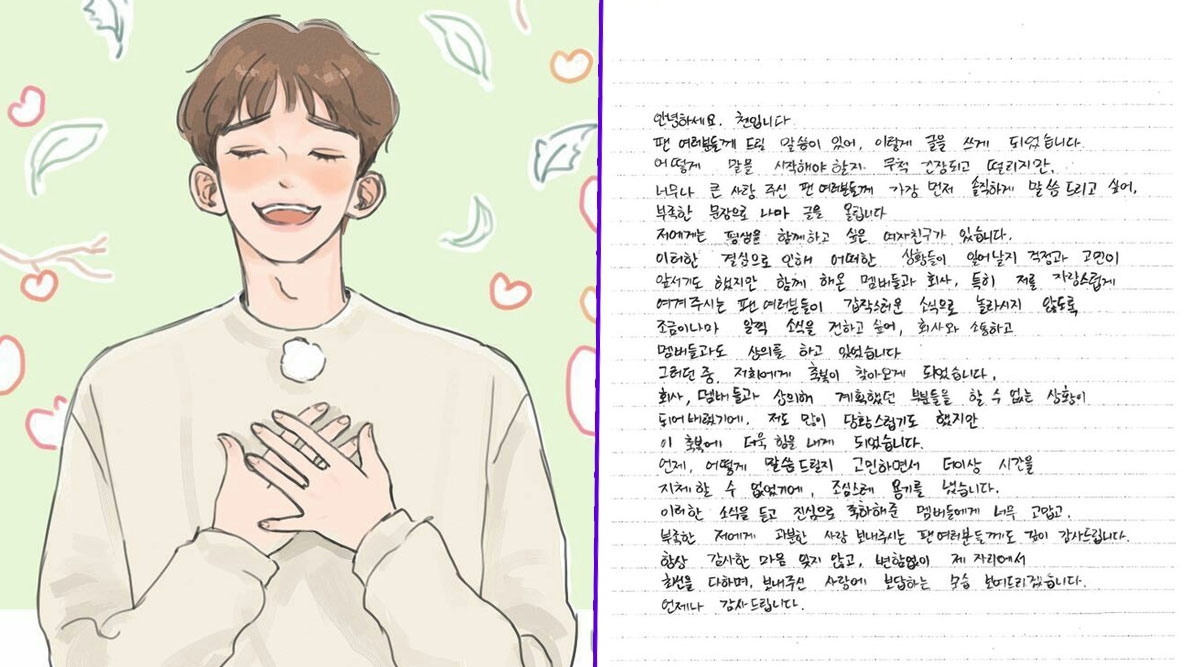 Twitter has been taken over by EXO's Chen aka Jongdae's fans after he officially posted a confirmation that he is planning to get married. Kim Jongdae shared with his fans a heartfelt letter that was handwritten dedicated to EXO's fan cafe and netizens are on an emotional rollercoaster ride. In the letter, Chen shared with his fans that he has a girlfriend whom he wants "to be with for the rest of my life". Jongdae shared his good news with his fans and lover and he has been trending ever since.

He said how he wants to share the news with fans without surprising them too much. He also referred to how he had spoken with SM Entertainment and other EXO members before choosing to share the news publicly. For those who don't know about Exo, it is a South Korean–Chinese boy band based out of Seoul. The group consists of nine members: Xiumin, Suho, Lay, Baekhyun, Chen, Chanyeol, D.O., Kai and Sehun.

In the letter, he also thanked the EXO members for their love. He said, he is "grateful to my members for genuinely supporting and congratulating me and to our fans for always giving us so much love."

Check out the screengrab of the letter:

"Hello, this is Chen.

I have something to say to my fans, so I wrote this letter. I don’t know how to start, so I am very nervous. I wanted to be the first one to tell my fans who I love so much, so I am leaving this post even with my lacking sentences.

I have a girlfriend who I want to be with for the rest of my life.

I was worried and concerned with what would happen with my decision, but I wanted to let everyone know early so my members, the company and especially my fans who are proud of me wouldn’t be surprised by the sudden news, so I talked it out with my agency and the members.

During that time a blessing came to me. I was shocked because I wasn’t able to take part in the plans that I had made with the members and the company. But, this blessing gave me strength and courage. I thought about how and when I should reveal the news but I didn’t want to wait any longer so I am carefully revealing it to you all now.

I am grateful to my members for genuinely supporting and congratulating me and to our fans for always giving us so much love. I will always be grateful for all of you and will continue to do my best in the position I am in.

According to Soompi.com, A source from SM Entertainment confirmed that Chen’s fiancée is pregnant. The source said, "It is true that Chen’s bride-to-be is pregnant." They further said that because she is a non-celebrity,

"they cannot reveal how far she is in her pregnancy or any other related details." Reports have it that Chen will be marrying his girlfriend, a non-celebrity, in a private ceremony with close family and friends and that his fiancée is expecting a child. While we wait for more details, we send across best wishes for Jongdae and the bride-to-be.