Despite so many warnings and instructions by the cyber crime experts, people still fall prey to such easy money temptations that somehow reach to them through WhatsApp forwards, fake phone calls, fake E-mails or other such mediums. 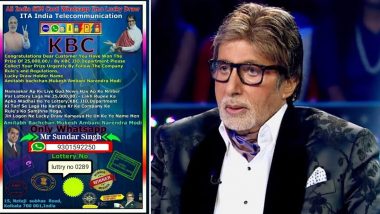 It is not a new thing for people to get duped in the pretext of 'winning' money or being being a part of 'lucky draw.' Despite so many warnings and instructions by the cyber crime experts, people still fall prey to such easy money temptations that somehow reach to them through WhatsApp forwards, fake phone calls, fake E-mails or other such mediums. Here is one more such fake WhatsApp forward related to Amitabh Bachchan's quiz show, Kaun Banega Corepati (KBC). This poster claims that the person who received it won Rs 25,00,000 as prize money. KBC Lottery Fraud: Fraudsters Dupe Mumbai Woman of Rs 2.90 Lakh by Sending Her Fake Copies of KBC Lucky Draw Certificate & Cheque on WhatsApp.

The poster has the pictures of India's Prime Minister Narendra Modi, business tycoon and Jio brand head, Mukesh Ambani and KBC host Amitabh Bachchan on it. It has 'All India Sim Card WhatsApp Imo Lucky Draw' written over it. The message claims that the lucky winner receives this huge sum gifted by KBC team and Jio department. It also instructs everyone to follow the rules and regulations and that the concerned person should 'Only WhatsApp' a certain person named as 'Sundar Singh' on the given number. In case you have still not figured it out, all these claims are FALSE and no such scheme or draw has been announced by Sony TV, KBC makers, Jio company or PM Modi. 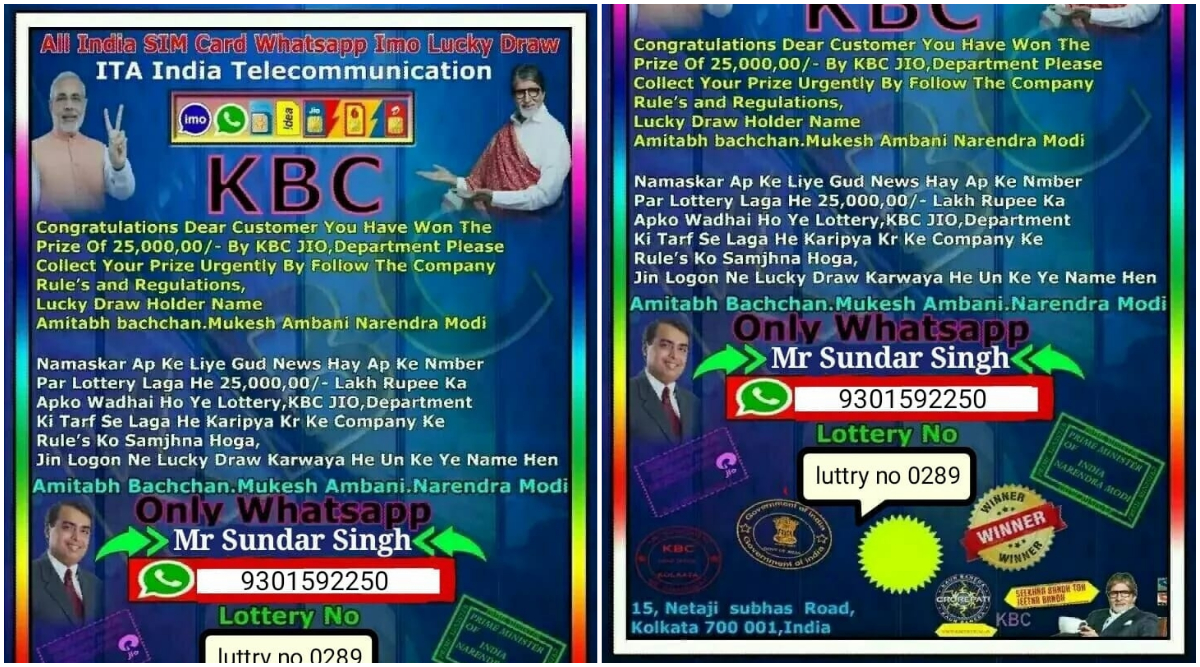 In January this year, similar duping case was reported in Mumbai. A 33-year-old woman was cheated of Rs 2.90 lakh in an cyber fraud that claimed that she had won KBC lottery of Rs 25 lakh. Well, it is a no brainer that no one is shelling out money for 'free' in this economic slowdown but nevertheless, people are falling for it without verifying the official source!

It is a Fraud Message! KBC Has Not Announced Any Such 'Lucky Draw' Scheme.

(The above story first appeared on LatestLY on Jun 24, 2020 09:55 PM IST. For more news and updates on politics, world, sports, entertainment and lifestyle, log on to our website latestly.com).