She also admitted that it was a risk to lie to such a huge fan base but she had to bring up the very important point of not everything being true on the internet. 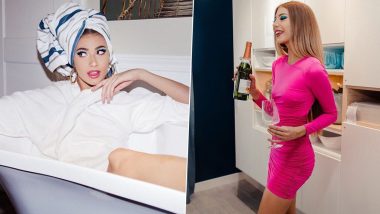 Do not believe everything you see on the internet said a wise person and it stands true, especially on Instagram. Influencer Natalia Taylor has given a clear message on why you should not believe whatever you see on the 'gram. The American influencer managed to fool over 3 lakh people into believing that she took a vacation to Bali when all she did was visit a local interior store. Taylor uploaded a set of glamorous pictures on her Instagram feed and in the captions suggested that she's on a vacation in Bali. But later in a YouTube video, she revealed that she hasn't ever been to Indonesia and all those fancy pictures were taken at local IKEA store. Instagram Influencer Exposed by Sister, Reveals Her 'Hike' Photos Were Taken in the Backyard (Tweet Goes Viral).

Natalia Taylor boasts of almost 314,000 followers on her Instagram and over 1.94 mn subscribers on her YouTube. In the first week of February, she uploaded a series of pictures to give an impression to her followers that she's on a vacation in Bali. Her pictures seemed to show she's living the good life in luxury hotels, posing in a bathtub and drinking wine in a beautiful setting. Her supportive followers encouraged and praised her stylish pictures. But no one would have known the truth behind these pictures had Taylor not revealed it herself. In a video titled, "i FAKED a vacation at IKEA" on her YouTube channel, she told that her pictures were shot at an IKEA store and that she's never been to Indonesia. Tupi Saravia, Famous Travel Influencer Accused of Photoshopping 'Same Clouds in Every Photo'; Twitter In Shock.

A Fine Wine and Dine?

While the pictures may look convincing, the truth is far from it.

Watch Video of Her Shoot at IKEA:

In this video, she agreed that she faked it but wanted to give out an important message to not believe anything and everything that is shown on the 'gram. "The point of this video is to see if you really can fake it 'til you make it," she said. Adding that there are so many influencers who easily fake being at places where they aren't with the help of photoshop. She also admitted that it was a risk to lie to such a huge fan base but she had to bring up the very important point of not everything being true on the internet.

(The above story first appeared on LatestLY on Feb 18, 2020 05:59 PM IST. For more news and updates on politics, world, sports, entertainment and lifestyle, log on to our website latestly.com).