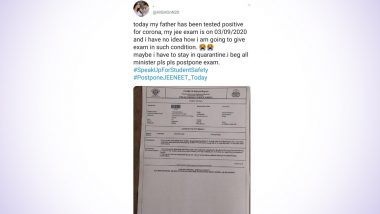 Huge protests are being held on JEE and NEET postponement due to COVID-19 outbreak. However, the education minister, Ramesh Pokhriyal ‘Nishank’ on Wednesday said in a video that many candidates and parents wanted to take the entrance examinations.  But amid the whole debate about JEE and NEET postponement due to COVID-19, a person who goes by the name @HighOnN20 shared a tweet seeking help from the authority to postpone JEE exam, is going viral. In the tweet, the boy has attached COVID-19 positive test result of his supposed father and he is pleading the Indian government to postpone the JEE exam(which he is supposed to take on 03/09/2020) citing his father's health. Naturally, more people began sympathising with the boy's condition until some netizens noticed that the reports show the address of Lahore, Pakistan! Yes, it was a sham. Moreover, the reports were from April month. ‘Postpone JEE and NEET Exams 2020,’ Students Continue Their Twitter Campaign Voicing Their Disagreement Over NTA’s Decision to Conduct Entrance Exams Amid the Pandemic. 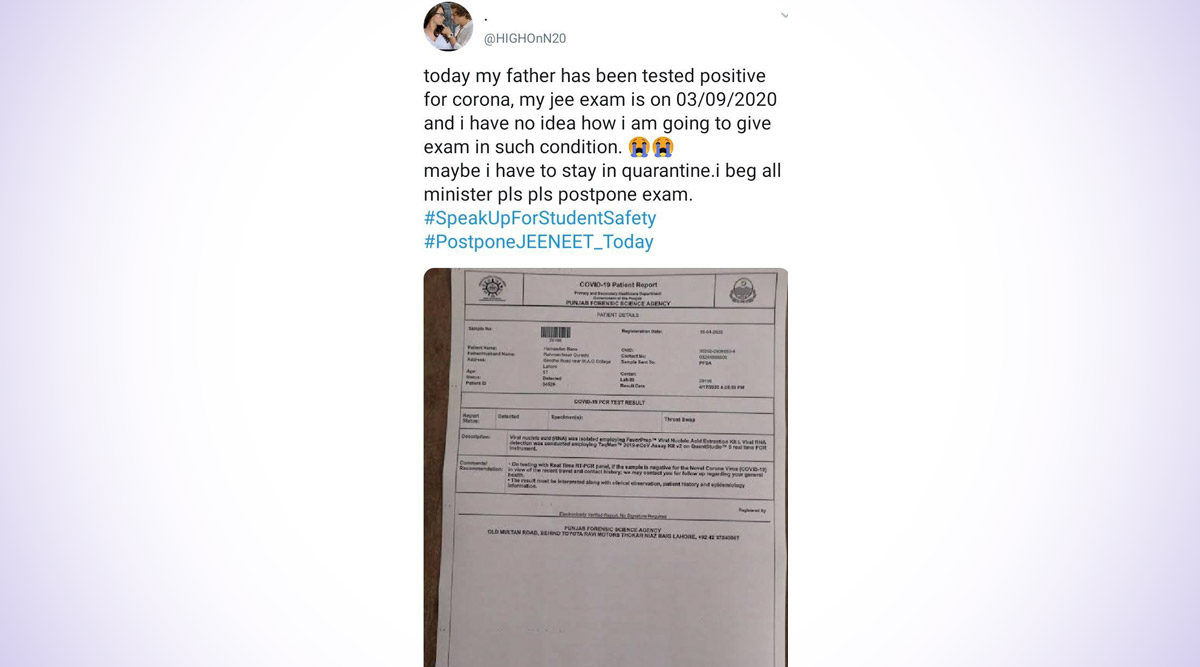 For those who do not know, the Joint Entrance Examination (JEE) is an engineering entrance examination conducted for admission to various engineering colleges in India. It is constituted by two different examinations - JEE Main and the JEE Advanced.

Comments like, "Take care of papa yar. We all wish and hope that he will be well soon and let's be united and win this battle" took over Twitter until many pointed out that the reports had the address of Pakistan and it was dated for the April month. Check out some reactions:

Now the tweet has been deleted and the account has been deactivated as well. People have been pointing out how the JEE postponement debate has now gone international.  However, the order of the Supreme Court decision on conducting NEET, JEE exams along with the request of students as well as parents, the National Testing Agency (NTA) will be followed.

(The above story first appeared on LatestLY on Aug 28, 2020 07:02 PM IST. For more news and updates on politics, world, sports, entertainment and lifestyle, log on to our website latestly.com).