Lady Gaga Bradley Cooper Memes From the Oscars 2019 Are Out! Twitter Points Out ‘Sexual Tension’ Between the Two During ‘Shallow’ Performance

Twitter wants Lady Gaga and Bradley Cooper to get on with it after their romantic performance of "Shallow." 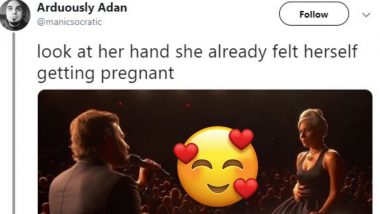 Fans who have been rooting for Lady Gaga and Bradley Cooper to get together for a while can now feast their eyes. The two performed the Oscar-winning song "Shallow" for the audience at the award ceremony and Twitter couldn't help notice subtle signs of sexual tension. Their crackling chemistry on-screen and off-screen have been quite apparent after their Oscar-worthy performances in A Star is Born. The two have heaped praises on each other in every interview and have been unabashedly affectionate. The whole world and its brother has been ‘shipping’ the two, hoping that the two would just get it on.  But sadly for fans, Gaga was in a committed relationship with talent manager Christian Carino and Cooper with model Irina Shayk, with whom he had a baby in 2017.  But with Lady Gaga’s break up, fans have been anticipating that one impediment in the Gaga-Cooper relationship is now removed. It didn’t help that their Oscar performance of “Shallow” made us go weak in the knees. Cameras captured the two of them gazing lovingly into each other's eyes. And since nothing escapes Twitter, the meme machine is churning out Lady Gaga and Bradley Cooper memes about their alleged sexual tension from the Oscars.

The performance started with Cooper serenading Gaga and she joining him on the piano. Throughout the song, the two couldn’t take their eyes off each other. Towards the end of the song, their faces are achingly close, sending us to the edge of our seats. Not surprisingly, the memes are out! Oscars 2019 Funny Memes: From Aquaman Jason Mamoa’s Scrunchie to Billy Porter’s ‘Cinderella’ Outfit, Best Academy Award Jokes to LOL.

...And the memes and tweets happened:

Imagine believing these people aren’t madly in love with each other pic.twitter.com/e1tzzC5Yua

I KNOW BRADLEY PARKED HIS MINI COOPER INSIDE GAGA AT LEAST ONCE pic.twitter.com/gcNDeH5LfV

imagine being BCoop's wife with a front row seat to that pic.twitter.com/A8uAX1O4kI

Me every time my husband says he just unloaded the dishwasher pic.twitter.com/O9IXIk4bID

look at her hand she already felt herself getting pregnant pic.twitter.com/86WQaE22Ac

Some even pointed out how a possibly jealous Shayk must have wedged herself between the two.

I know Irina Shayk made sure to put herself BETWEEN Bradley Cooper and Lady Gaga and I’m crying 😂😂😂 #Oscars #Oscars2019 pic.twitter.com/S4qUoEEbH8

Gaga and Cooper got together for the musical A Star is Born and have wowed critics and audiences alike with their performance. Their Oscar-winning song "Shallow" is one of the most crucial moments of the film, where the two perform together for the first time on stage. Gaga plays Ally a smalltime singer who falls in love with Jackson Maine (Cooper's character) and eventually makes it big.

(The above story first appeared on LatestLY on Feb 25, 2019 12:10 PM IST. For more news and updates on politics, world, sports, entertainment and lifestyle, log on to our website latestly.com).