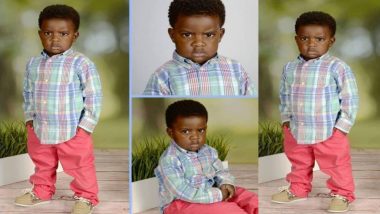 In this era wherein you never know what goes viral, we have seen things right from a simple expression to something like a hairdo go viral and HOW! Viral has become a term that is living its best life these days. The very recent picture that has gone viral is the school photo of a little boy who looks like he is miffed at something but got clicked for school anyway. However, it is said that little boy picture was posted by his father who had no idea that these pictures would go viral.

The post was shared more than 100,000 times and had so many likes. The man said that he had eaten away his son's pop tart before school pictures were clicked and that his son vowed not to smile and then that's how the pictures turned out. The post read, 'Y’all pray for my son, nothing wrong with him but I ate his pop tart before his class picture and he said he never smiling again.'

Her post read, 'So Kari's school pics from last year has went viral. Nothing we can do about that part...it is what it is. There are a lot of posts/memes going around about him, and I must admit, some are hilarious. But it still doesn't sit well with me that he's being posted world wide. But like I said, it's out there now and we can't stop it. However, if you happen to see a post where someone is claiming him as there child, that is not funny...I don't care if it is just a joke. Don't be out here trying to use our son for likes or money. That's lame and so disrespectful. Please, if yall continue to see people claiming him, claiming the pic as there's, creating GoFundMe accounts and making money from my baby pics, please report it and let us know. Thanks!' Take a look at the post.

While memes are great, it is not really the right thing to use somebody's pictures, especially a child's pictures without permission. What do you think? Let us know your views in the comments section below.

(The above story first appeared on LatestLY on Nov 20, 2018 05:36 PM IST. For more news and updates on politics, world, sports, entertainment and lifestyle, log on to our website latestly.com).