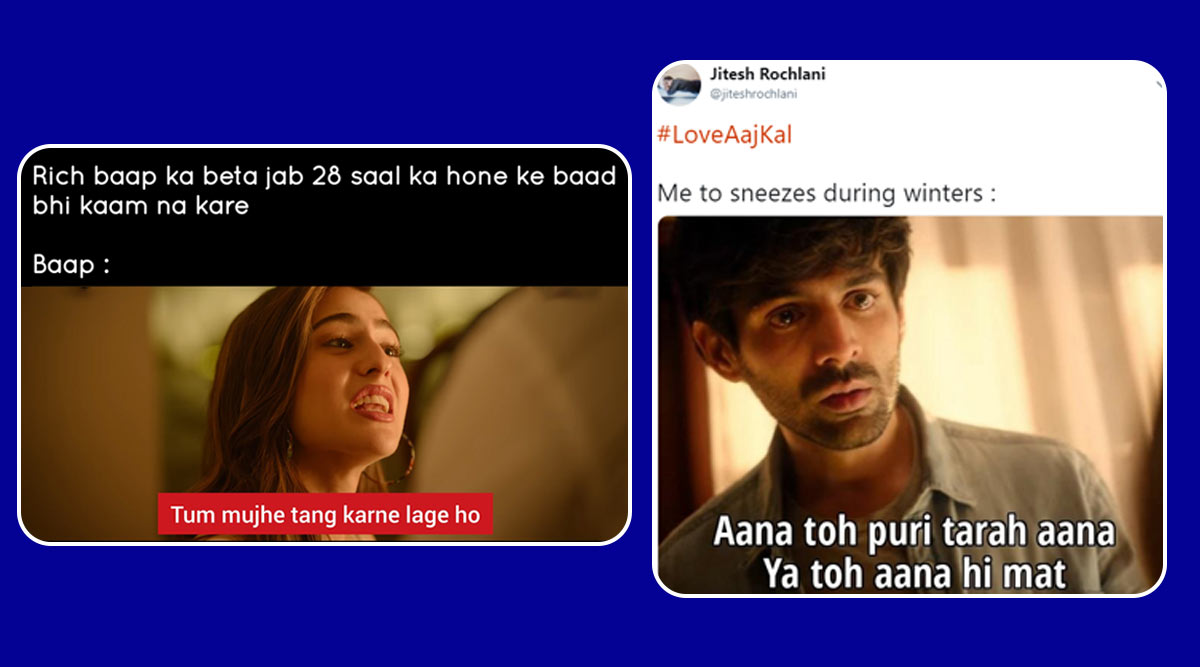 The trailer of Imtiaz Ali's new film Love Aaj Kal is here and if you are a meme-lover then you know it's a new target for making memes and jokes. It has almost become a norm these days to make memes out of new posters, first looks, trailer or songs. And soon as the trailer of the film starring Kartik Aaryan and Sara Ali Khan dropped, the reactions have started coming in. And so are the funny memes and jokes.

The trailer shows quite a charming chemistry between the lead pair and definitely have an Imtiaz Ali charm to it. The whirlwind romance tale between Veer (Kartik) and Zoe (Sara) spans across two decades. It is a tricky love tale that we saw Saif Ali Khan and Deepika Padukone play out in the year 2009. And now with Saif's daughter returning as the main lead, fans are of course excited. Soon as the trailer dropped off, funny memes and jokes have also started trending online. It is Kartik Aaryan's dialogue, "Aana hai toh puri tarah aao.." which has become an audience favourite. Malang Trailer Funny Memes: Disha Patani and Aditya Roy Kapur Starrer Inspire Some Hilarious Jokes on Twitter and We Can’t Stop Laughing! (View Tweets).

Those Who Didn't Get it!

Love is in The Park

When Police saw couple in park

Me to sneezes during winters : pic.twitter.com/3jN1iMELKe

When ur US friend tells he will visit India but will not bring anything with him #LoveAajKal #LoveAajKal2 pic.twitter.com/sVRWDqBliS

Mummy Y U Do Dis?

Clearly, the trailer has resonated with the meme-makers and meme lovers too! The tricky romantic tale is releasing on Valentine's Day 2020. SarTik fans definitely cannot wait for this rom-com.