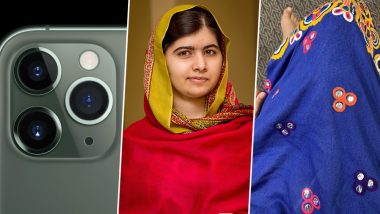 Apple on Tuesday launched a series of new devices with several new health features, international emergency calling option from Apple watch, 'Always-On Retina' display among many others. During the annual event, the tech giant introduced multiple devices, however, it is the camera of Apple iPhone 11 that grabbed the eyeballs of social media. The arrangement of the camera lenses generated hilarious reactions as people compared it on trypophobia inspiring funny memes and jokes. And as Apple iPhone 11 Pro and Pro Max memes and jokes continue to flood the internet, Pakistani activist and youngest Nobel Prize laureate Malala Yousafzai couldn't stop herself from trolling the phone's camera feature. Malala took to Twitter sharing the photo of her dress which features circular designs, just like the camera of the latest Apple phone. Apple iPhone 11 Funny Memes and Jokes: From Trypophobia to Fidget Spinners Check Best Tweets on The New iPhone Series.

Malala Yousafzai posted a picture of her bright blue dress full of circular patterns with the caption, "Is this just a coincidence that I wore this dress on the same day as Apple iPhone 11’s launch #iPhone11." The dress has a pattern similar to that of the iPhone11 Pro. Malala's tweet was quick to go viral on social media and has received over 7,300 likes on Twitter at the time of publishing this article. People commented that the patters on her dress make it look like that there are fidget spinners on it. Social media users said the lenses gave them major trypophobia issues. The cameras were also compared to the in-built shaver and even induction cooktops. Apple iPhone 11, iPhone 11 Pro & Apple iPhone 11 Pro Max Launched; Prices, Pre-Order Date, Features & Specifications.

Is this just a coincidence that I wore this dress on the same day as Apple iPhone 11’s launch #iPhone11 pic.twitter.com/k6s4WM4HKq

Apple launched three new iPhones under the iPhone 11 Series. Named as Apple iPhone 11, iPhone 11 Pro and iPhone 11 Pro Max, along with Apple Arcade, Apple TV+, Apple Watch Series 5, new iPad & iPadOS. The new iPhone 11 Pro and Pro Max are made from surgical grade stainless steel. The three cameras on the back are a 12MP wide camera, a 12MP telephoto lens and another 12MP lens for ultra-wide photography.

(The above story first appeared on LatestLY on Sep 11, 2019 12:52 PM IST. For more news and updates on politics, world, sports, entertainment and lifestyle, log on to our website latestly.com).