Photos of Vitali Klitschko, Ex-Boxing Champ and Mayor of Kyiv in Battle Fatigue and Loading a Machine Gun Amid Russia’s Invasion of Ukraine Go Viral

Images of Vitali Klitschko with a machine gun were posted on social media by boxinginsider.com late on Friday night, and captioned it, "Vitali Klitschko Shown Fully Engaged In Military Defense Of Ukraine". 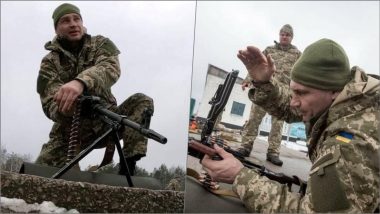 London, Feb 26: Images of former heavyweight boxing champion Vitali Klitschko -- who is also the mayor of Ukraine's capital city, Kyiv -- in battle fatigue and loading a machine gun to defend his country from Russian aggression -- have gone vital.

Images of Vitali Klitschko with a machine gun were posted on social media by boxinginsider.com late on Friday night, and captioned it, "Vitali Klitschko Shown Fully Engaged In Military Defense Of Ukraine".

The report added that, "Vitali Klitschko has claimed he's going to fight to defend his Ukrainian homeland against the current Russian military invasion."

On Thursday, the first day of the Russian invasion, Vitali and brother Wladimir had asked the international community for help in the face of Russian hostility in a video posted by online boxing editor for talkSPORT.com, Michael Benson.

Ukrainians are not backing down. This is the Mayor of Kyiv, Vitali Klitschko.#RussiaUkraineWar pic.twitter.com/tM2Y1j0EMJ

Vitali said in the video that, "I am calling to all the international partners to observe this tragedy that is happening nowadays in Ukraine and this senseless war which is not going to have any winners but losers. I want to tell you we must stay united against this aggression... Russian aggression. Don't let it continue happening in Ukraine, don't let it happening in Europe and eventually in the world. United we're strong."

"Former heavyweight boxing champion Vitali Klitschko said he would take up arms alongside his brother and fellow Hall of Famer Wladimir Klitschko for Ukraine," boxinginsider.com added.

The report said that 50-year-old Vitali had become the mayor of Kiev in 2014. "Since retiring from boxing in 2013, he has earned a reputation for being as fearless in politics as he was in the ring. Now, however, the man is very publicly facing the biggest challenge of his life, as well as Europe's biggest direct military challenge since World War Two," the report added.

(The above story first appeared on LatestLY on Feb 27, 2022 01:35 PM IST. For more news and updates on politics, world, sports, entertainment and lifestyle, log on to our website latestly.com).